Admission to all concerts and events associated with Spring Back to Vail is free and open to the public.

“While winter is definitely still upon us here in Vail, we’re looking forward to finishing the 50th anniversary ski and snowboard season with a bang, thanks to a fantastic entertainment lineup during Spring Back to Vail this year,” said Davy Ratchford, director of sales and marketing for Vail Mountain.

“The combination of O.A.R, Jimmy Cliff and Sublime with Rome will undoubtedly deliver a series of fun, high-energy shows for our guests.” 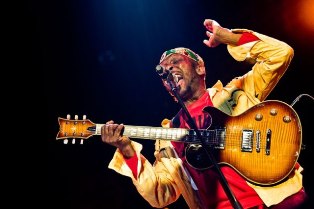 Short for Of a Revolution, O.A.R is an alternative rock band well-known for rocking the stage at their live performances and extensive summer touring. The five-member band, formed in 1996, found popularity on the college campus at Ohio State University and gained a following as a popular live act on other college campuses before gaining mainstream exposure and reaching the top of the Billboard charts over the course of their long career.

The jam band-influenced group has released seven studio albums, including their latest CD/DVD release Live on Red Rocks & King, and will take the stage at Spring Back to Vail on Friday, April 12 in Ford Park.

On Saturday, April 13, Sublime with Rome bringing a blend of reggae, ska, punk and surf-rock, will take the Spring Back to the Vail stage at Ford Park for another free show. The band is a collaboration between Eric Wilson of Sublime, celebrated drummer Josh Freese and lead vocalist and guitarist Rome Ramirez.

Spring Back to Vail is the annual spring bash in Vail, celebrating the close of the skiing and snowboarding season with a jam-packed schedule of events that includes free headliner concerts, nightly bar parties, the Spring Back to Vail Expo Village and the wet ‘n’ wild World Pond Skimming Championships.

For more information on Spring Back to Vail, including the full schedule of events and registration for the World Pond Skimming Championships, go to www.vail.com/springback.

Spring Back to Vail is presented by Vail Mountain, Bud Light, Pepsi, Rolling Stone Magazine, Sprint, Red Bull, GoPro and Town of Vail, and is brought to you in part by Helly Hansen, Maui Jim, Macanudo, Liberty Skis, Vail Daily and KZYR-The Zephyr.

It’s hard to search out educated individuals on this subject, but you sound like you recognize what you’re speaking about! Thanks womens vintage clothing

Thanks for your wonderful post! It has long been very helpful. I hope that you’ll continue sharing your wisdom with us. new jersey addiction detox

Dry fruits are again divided into dehiscent that whose seeds are contained in a seapod and indehiscent those which are not in seedpod e. mung beans for sale

I don’t normally comment but I gotta tell appreciate it for the post on this great one : D. inspirational quotes

I really love the way you discuss this kind of topic.;*.;- business insurance new orleans

One of my all time special quotes appears very fitting here “Success is nothing more than a few simple disciplines, practiced every day; while failure is simply a few errors in judgment, repeated every day. It is the accumulative weight of our disciplines and our judgments that leads us to either fortune or failure.”–Jim Rohn Service Business Management Software

I always was concerned in this subject and still am, regards for putting up. retro clothing

You ought to indulge in a tournament for example of the best blogs on-line. I’m going to recommend this page! transportation from augusta to atlanta airport

This is the fitting weblog for anybody who desires to seek out out about this topic. You notice a lot its virtually arduous to argue with you (not that I really would want…HaHa). You undoubtedly put a new spin on a subject thats been written about for years. Nice stuff, just great! instagram panel

An fascinating discussion may be worth comment. I do believe that you ought to write regarding this topic, may possibly not be considered a taboo subject but typically consumers are insufficient to speak on such topics. An additional. Cheers instagram reseller panel

When I originally commented I clicked the -Notify me when new surveys are added- checkbox now every time a comment is added I receive four emails with the same comment. Is there that is you may get rid of me from that service? Thanks! mobiles Arbeitsmanagement

Thank you for some other magnificent article. The place else could anyone get that kind of info in such a perfect manner of writing? I have a presentation subsequent week, and I am at the look for such information. The Beauty Spot SD

But wanna state that this is very useful , Thanks for taking your time to write this. Flores para san valentin

Many thanks finding the time to go about this amazing, I find myself eagerly regarding and love finding out more to do with this excellent field. In the instance that conceivable, due to the fact accomplish mastery, exactly what thoughts replacing your entire website by having indepth info? This is used for i am. investment advisor

I’m sorry for that large evaluation, but I am truly loving the brand new Zune, and hope this, as well as the excellent reviews another men and women wrote, will help you decide if it is the appropriate selection for you. pacman168

We are a group of volunteers and starting a new scheme in our community. Your site offered us with valuable information to work on. You’ve done a formidable job and our whole community will be thankful to you. supplements

Could not thank you enough for the blogposts on your web-site. I know you add a lot of time and energy into all of them and really hope you know how much I enjoy it. I hope I’ll do a similar thing person sooner or later. situs slot

I am typically to blogging and i genuinely appreciate your content. The content has really peaks my interest. I will bookmark your site and maintain checking for new data. https://manly-manners.com/

great post, i undoubtedly love this site, keep on it bandar toto 4d

An extremely interesting examine, I might not agree completely, but you do make some very legitimate factors. agnus castus

When do you think this Real Estate market will go back in a positive direction? Or is it still too early to tell? We are seeing a lot of housing foreclosures in Altamonte Springs Florida. What about you? Would love to get your feedback on this. Certified Financial Analyst