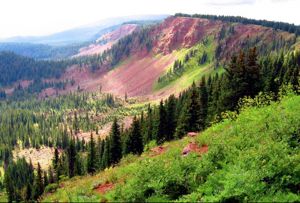 U.S. Rep. Jared Polis, D-Boulder, introduced a scaled-down wilderness proposal Wednesday night just as the House wrapped up earlier than expected with some major unfinished business left for a lame-duck session after mid-term elections in November.

Polis at that point hopes for his Eagle and Summit County Wilderness Preservation Act to be referred to the House Natural Resources Committee for review. Then, regardless of whether Republicans regain control of the House, he hopes his bill can find enough votes either as a stand-alone piece of legislation or part of a broader wilderness bill.

The Polis bill would protect nearly 166,000 acres of public land in Summit and Eagle Counties — 88,000 as wilderness and 78,000 as special management areas, including for high-altitude U.S. Army National Guard helicopter training near Eagle.

The bill is a far cry from the controversial Hidden Gems wilderness proposal that called for more than 300,000 new acres of wilderness designation for U.S. Forest Service lands and some BLM acreage in Eagle, Summit, Gunnison and Pitkin counties. Polis, who 2nd Congressional District only includes Eagle and Summit, trimmed nearly 80,000 acres from the nearly 245,000 acres Hidden Gems proposed for the counties in his district.

His scaled-down proposal gets the language on the record and could be incorporated in a larger proposal, but 3rd Congressional District Democrat John Salazar – whose district includes Gunnison and Pitkin — already has championed the San Juan wilderness bill and has been bucking the Democratic agenda as a Blue Dog fighting for re-election.

Groups such as the White River Forest Alliance, which opposed Hidden Gems because of restrictions on motorized travel such as mountain biking, four-wheeling and snowmobiling, are pleased to see Polis' scaled-back plan, according to the Aspen Times, although they are not endorsing the new plan.

Here are comments of local support issued in a release by Polis' office Thursday:

“The vitality of our mountain resort economy flows from the natural environment around us and the balance between use and enjoyment and preservation of important lands. Congressman Polis' Eagle and Summit County Wilderness proposal has been tailored to help protect some of the more vulnerable lands adjacent to existing wilderness, while still leaving plenty of public lands for the mixed uses many of our residents enjoy. This is a real gift to future Eagle County residents.”

“The preservation of our natural resources is not only good for our economy but for future generations. Protection of land, wildlife habitat, and water resources is absolutely vital to our future. Once these resources are gone, they are irreplaceable.”

“We're in the tourism business and people come to mountains to experience the natural beauty of Colorado, so it only makes sense that we preserve the scenic, wild areas near Vail for posterity. Polis' bill captures what we hope to achieve to protect our community's best interest.”

Companies selling weight loss coffee focus on a few means by which their coffee is supposed to help you lose weight. First off, they claim their coffee will help curb your appetite. This is obviously helpful since the less you eat, the fewer calories your body needs to burn, and thus the more weight you lose. The other side of the argument here is that just drinking the coffee itself can add calories, and associated activities can be unhealthy as well. If you add cream and sugar to your coffee, those are both high calorie foods. What Is MCT Oil In Bulletproof Coffee

Developers of iPhone apps are reaping huge profits. However, you do not need to have a big company or be a skilled online marketer to be able to develop applications for the iPhone on your own. With the right knowledge and tools, it is possible to gain profit from selling iPhone applications even if you do not have programming skills. What Bank Does Cash App Use

Credit card use in the U.S. is growing rapidly with just over 14% of Americans holding more than 10 cards. Take on board the fact that the average American holds four credit cards and it becomes patently obvious that credit cards now play a major role in our day to day lives... evolve card store merchandise

Do you truly have the proper concept of Cardio? This question arises because so many people don't have a clear understanding of Cardio and maximum heart rate. You need to know how to get your heart rate up to certain levels and how to maintain those levels to reach certain Fitness Goals like weight loss. You also need to calculate your heart rate, but you can learn all about this by following this article. Cardio clear 7