RealAspen News and Community Content Feed
By Real Vail
Real Aspen – December 18, 2012
Vail’s Lindsey Vonn is taking a break from ski racing, citing the need to recover some energy and strength after being hospitalized with an intestinal infection in Vail last month.

The second-best women’s ski racer of all time with 57 World Cup wins has been struggling so far this season, even though she has won four races, including a super G at St. Moritz as recently as Dec. 8.

Vonn collapsed on the snow after a disappointing giant slalom finish in Aspen Thanksgiving weekend, then won three straight races at Lake Louise, Alberta, the following weekend. Since St. Moritz, however, Vonn has been very inconsistent, failing to finish races as Slovenia’s Tina Maze has been on a tear.

Vonn, the defending overall champion, now sits fourth in this season’s chase, a daunting 385 points behind Maze. Vonn’s hunt for a fifth overall title now seems to be in serious jeopardy with the Ski and Snowboard Club Vail product planning to sit out at least the rest of the month.

“After talking with my family and consulting with my coaches and trainers, I have decided to take a break from the World Cup circuit,” Vonn wrote on her Facebook page. “Since my intestinal infection last month, I have been struggling with my energy and strength. I believe that some time off the mountain will help me regain the physical strength that I require to compete at the level that I demand from myself.” 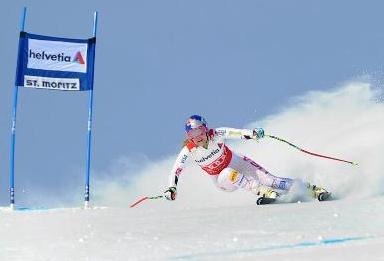 Vonn went on to explain that the hiatus has nothing to do with recent revelations in People Magazine that she has been depressed for years and takes anti-depressants.

"Everything about my life seemed so perfect to people,” Vonn told People. “But I struggle like everyone else.”

“I want to be emphatic that this [break from competition] has nothing to do with my recent interview with People Magazine,” Vonn, 28, said on Facebook. “I had completed that interview weeks before I was in the hospital with the intestinal infection.”

Vonn went on to thank her fans and sponsors, which includes Vail Resorts.

“I want to thank my sponsors for their continued support,” Vonn said. “Most of all I want to thank my fans for all of the kind words and love you have shared with me. I wish all of you a happy and healthy holiday and look forward to getting back on the mountain in the New Year.”

In other World Cup news involving Vail-area athletes, Eagle-Vail’s Mikaela Shiffrin matched her best finish ever in GS on Sunday, coming in ninth in Courchevel, France, in a race that was won by Maze. Vonn skied out and did not finish the race.

“I knew it was a long shot to get into the top 10,” Shiffrin said in a U.S. Ski Team release. “I was more psyched that I made it down and survived the first run. There were a few places where I thought I was going to die or give up. I was psyched to get a second run and thought it would be a walk in the park, so I wasn't worried about it.”

Meanwhile, in Ruka, Finland, over the weekend, Vail’s Heidi Kloser turned in her most successful dual moguls competition result to date, finishing seventh in an event won by Bozeman’s Heather McPhie.

“The athletes started off a little nervous,” U.S. moguls coach Garth Hager said in a release. “The first event is always a challenge to know how everyone is going to compete and how their off season training has paid off. A clean slate might be an advantage but anything goes in the first event.

“The team as a whole had a really great start. To have four ladies in top 10 and three men in the top six is a tremendous start. We are all looking forward to carrying this momentum to the next event.”

I cannot wait to dig deep and kickoff utilizing resources that I received from you. Your exuberance is refreshing. 토토사이트

it is mounted a head of reality virtual gross display, but who cares this is not as you will be looking at the. https://www.rsorder.com/rs-gold

You make so many great points here that I read your article a couple of times. Your views are in accordance with my own for the most part. This is great content for your readers. 먹튀검증업체

I have read your blog it is very helpful for me. I want to say thanks to you. I have bookmark your site for future updates. Emirati Dirham notes for sale

Thanks for the blog loaded with so many information. Stopping by your blog helped me to get what I was looking for. walmart call off number

Extraordinary things you've generally imparted to us. Simply continue written work this sort of posts.The time which was squandered in going for educational cost now it can be utilized for studies.Thanks serp

I think this is definitely an amazing project here. So much good will be coming from this project. The ideas and the work behind this will pay off so much. Onewheel XR Accessories

Browse all our Static Caravans for Sale, We are all year mobile homes producer. Mobile homes for sale in affordable prices Scotland, Wales, England. Static Homes For Sale Near Me

Many homework on the continual hunt along with offstage on the road to winning. Definitely not attached, simple to-fall as a result of wayside; And not investigation, afterward into a path travel toward the black. Onewheel XR Accessories

We help people by providing honest reviews on different health and fitness products. If you are also serious about your fitness, then click the below button to start your journey. Free from threat

Extremely intriguing online journal. A lot of web journals I see nowadays don't generally give anything that I'm keen on, however I'm most definitely inspired by this one. Recently felt that I would post and let you know. Managed IT Support near me Century City Los Angeles, California

This was a really great contest and hopefully I can attend the next one. It was alot of fun and I really enjoyed myself.. kitchen remodel omaha

When you want to search for members you need to become a member yourself. Go to the tab Date tonite

I wish more authors of this type of content would take the time you did to research and write so well. I am very impressed with your vision and insight. 토토사이트

I admire this article for the well-researched content and excellent wording. I got so involved in this material that I couldn’t stop reading. I am impressed with your work and skill. Thank you so much. Urban Treasures

Thanks for posting this info. I just want to let you know that I just check out your site and I find it very interesting and informative. I can't wait to read lots of your posts. easy uefi

thanks this is good blog. Guest Posting and SEO

Excellent .. Amazing .. I’ll bookmark your blog and take the feeds also…I’m happy to find so many useful info here in the post, we need work out more techniques in this regard, thanks for sharing. Wunderino

What a thrilling post. It is extremely chock-full of useful information. Thanks for such a great info. 메이저사이트

This article gives the light in which we can observe the reality. This is very nice one and gives indepth information. Thanks for this nice article. merchant services iso program