He biked up to the Maroon Bells where he stopped to pose for photos with children stricken with cancer. The seven-time Tour de France winner waved at his fans, signed autographs and was reportedly in high spirits as he knocked out a 50-mile ride in about 2 1/2 hours for the inaugural benefit for the nonprofit Wapiyapi. 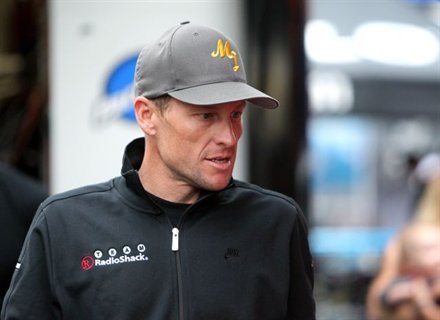 “We haven't finished tallying up all of our expenses and gross, but we probably netted $150,000. That's huge for us,” said Aaron Smith, the executive director for Wapiyapi, which is the Native American word for “healing.” The group organizes camps, retreats and support for children who have cancer.

Armstrong, a cancer survivor himself and a part-time resident of Aspen, became the main attraction of the charity event thanks to his girlfriend, Colorado native Anna Hansen.

Like the founders of Wapiyapi, Hansen attended the University of Colorado, where she studied biology, and began volunteering for the nonprofit. After she graduated, Hansen was tapped as a board director for Wapiyapi, and she also did some work with Children's Hospital in Denver and she became program manager for First Descents, which is a nonprofit dedicated to providing outdoor adventures to children with cancer.

Armstrong met Hansen through charity work and they began dating in July 2008. Now they have a 16-month-old son, and another baby on the way. (Armstrong has three other children from his marriage to Kristin Richard and, in late October, he is expected to have a total of five children.)

“We were trying to find a beautiful location to do a ride in the fall,” Smith said. “We wanted to hold it someplace where if people were to leave the Front Range, they would want to go. We talked with Anna and Lance about getting them involved and it turned out we held it in Aspen on one of the best weekends of the fall.”

The weather was postcard perfect Sunday and over 300 riders turned out for the fundraiser.

Smith said the money raised in Aspen over the weekend will allow Wapiyapi to eliminate the waiting list for next summer's camp. Last year, 125 children participated but 35 other children were stuck on the waiting list due to a lack of funding. Smith said the money will also help his organization embark on other new endeavors like providing support for Spanish-speaking families and support for families who have lost a child to cancer.

“It changes the ballgame for us completely,” said Smith, the only paid member of Wapiyapi. “It really allows us to begin providing some of the things we've been dreaming about for years.”

Smith said Wapiyapi, which is dependent on 180 volunteers, will be returning to Aspen next year.

“Everyone in our organization was blown away by the support Aspen showed our event,” he said.

Hansen, meanwhile, told the Associated Press that Armstrong is focusing on charities, not grand juries.

"I think you're always going to have people that are negative and haters and trying to spin stories to get attention or money," Hansen said. "I think you have to focus on the positive. That's kind of what we've been trying to do is focus on family and devoting our time to causes we care about — like this."

19 Comments on "Lance takes the high road in Aspen"

This is a truly good site post. Not too many people would actually, the way you just did. I am really impressed that there is so much information about this subject that have been uncovered and you’ve done your best, with so much class. If wanted to know more about green smoke reviews, than by all means come in and check our stuff. situs khusus judi slot online

Love what you're doing here guys, keep it up you also go here: joker slot

Thanks for sharing the info, keep up the good work going.... I really enjoyed exploring your site. good resource... บาคาร่า มือถือ

thank you for your interesting infomation. 메이저사이트

Most of the time I don’t make comments on websites, but I'd like to say that this article really forced me to do so. Really nice post! 먹튀사이트

Here are a few dissertation web sites when using the world-wide-web when you finally come to be clearly claimed in your blog site. ลิปสติก

Thank you a bunch for sharing this with all of us you actually realize what you are talking about! Bookmarked. Please also seek advice from my site =). We could have a hyperlink change contract between us! ดาวน์โหลดslotxo

There are specific dissertation web-sites by using the online world to build safeguarded web saved with your website online. ผิวขาดน้ำ

Electrical power dissertation web-sites on-line when you likewise be given clearly advertised with your web page. สล็อต เว็บตรงไม่ผ่านเอเย่นต์

I got too much interesting stuff on your blog. I guess I am not the only one having all the enjoyment here! Keep up the good work. https://VICHY-th.com

A lot of dissertation webpages on line as you may get hold of secured in a dark listed during the webpage. ดาวน์โหลด สล็อต 888

Thank you for this fascinating post, I am happy I observed this website on Google. Not just content, in fact, the whole site is fantastic. vergleichen

I’ve read some good stuff here. Definitely worth bookmarking for revisiting. I surprise how much effort you put to create such a great informative website. joker gaming

I am happy to find your distinguished way of writing the post. Now you make it easy for me to understand and implement the concept. Thank you for the post. Kanada Visa Application

Best work you have done, this online website is cool with great facts and looks. I have stopped at this blog after viewing the excellent content. I will be back for more qualitative work. Aplikasi Visa India Online

Excellent .. Amazing .. I’ll bookmark your blog and take the feeds also…I’m happy to find so many useful info here in the post, we need work out more techniques in this regard, thanks for sharing. 不舉

You have a real talent for writing unique content. I like how you think and the way you express your views in this article. I am impressed by your writing style a lot. Thanks for making my experience more beautiful. Wifi Door Lock System Malaysia