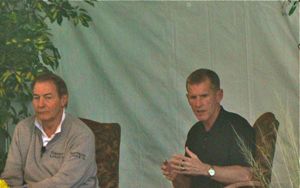 Gen. McChrystal stepped down as top commander of the war in Afghanistan in June before resigning from the Army in July, after a Rolling Stone article exposed derisive comments directed at the Obama national security team. An internal probe of the episode found that the “most egregious” comments in the article were not made by McChrystal or the senior officers on his staff. The magazine article did not quote McChrystal saying anything overtly insubordinate, but it did attribute several disparaging comments to unnamed senior aides within McChrystal's camp.

One audience member at the Forstmann Little event stood up and asked McChrystal if he were Obama, given the totality of the circumstances and all that the general knows, would he have fired himself.

There was a pregnant pause. Then the general cracked a wry smile and replied: “Several times.”

The crowd laughed before the room returned to seriousness.

“I offered my resignation and when he accepted it, I felt comfortable because that's what I was supposed to do,” McChrystal said.

Rose's discussion with the general predominantly dealt with Afghanistan.

“Right now, it doesn't exist,” said McChrystal, noting the perpetual state of civil war that has embroiled the country ever since the late 1970s. “Afghanistan is in some kind of post-apocalyptic nightmare.”

He said the people there have mixed feelings and a sense of distrust for the United States, which aided opponents of the pro-Soviet regime there in 1979 and then overthrew the Taliban in the fall of 2001.

“There is a gap in their expectations. There is a rising frustration from the people there,” he said.

But McChrystal said Afghans “are absolutely opposed to the Taliban” and ultimately seek stability.

He said how the United States proceeds from here is up to the policymakers, not the military. But he noted: “We are there now. Twenty-eight million people matter.” Stabilizing the country “can be done,” the general said.

McChrystal added that President Obama provided him with the number of troops he requested when he was in Afghanistan. And he acknowledged he had once pressed for commando operations in Pakistan.

“I think I was wrong,” he admitted. 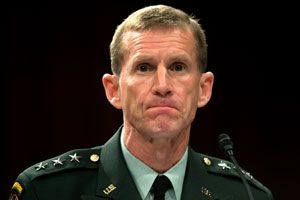 The region along the Afghanistan and Pakistan border — known as the Tribal Areas of Pakistan's North-West Frontier Province — has long been thought to be a potential site where the Taliban could be harboring terror mastermind Osama bin Laden. But McChrystal said U.S. forces moving into Pakistan would trigger a “xenophobic backlash” that would be counterproductive.

“In my view many leaders in Pakistan want us to succeed, but they're hedging their bets because they're not sure we can pull it off,” McChrystal said. “Iraq was hard. Afghanistan is complex.”

In case you were wondering, McChrystal doesn't know where to find bin Laden, or if he's even alive.

“I don't know where he is,” the general said, joking that it took a long time to find Olympic Park Bomber Eric Rudolph and he was hiding in the woods of the United States, not the Afghan mountains.

That can be troublesome, as insurgents often try to trick U.S. forces into killing civilians. “It's the matador and the cape: If the bull keeps running at the cape, he's going to tire himself out,” he said in reference to terrorists shooting at U.S. soldiers from civilian-occupied buildings, then quickly exiting.

While McChrystal seemed to show a bit of a soft side, he didn't mince words when relaying what he did after he watched the video of Abu Musab al-Zarqawi and his men behead American businessman Nicholas Berg.

“We figured out who all of them were and we went out and killed them,” the general said. 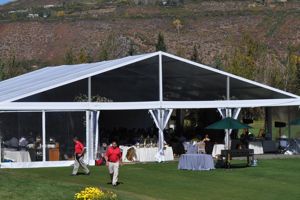 McChrystal also demonstrated an adroit ability to dodge a question. When Rose wondered whether Hamid Karzai was “a plus or a minus” for Afghanistan, McChrystal simply answered: “He's the president.”

“He may be the best retail politician I've ever seen,” the general elaborated. “The Afghan people want to believe in their president. … Getting around the country was often an epiphany for him” because the Afghan people welcomed Karzai with open arms, then hammered him with complaints.

Throughout the discussion, the crowd showered McChrystal with ovations and words of gratitude.

With blue skies, sunshine and picture-perfect mountains around him, the general offered this:

“We could have done better,” he said of the players in charge of the Afghanistan war. “In retrospect, I'd get everyone together, take them to Aspen — because this is a nice place — and I'd have everyone go mountain biking.”

Maybe that, he said, might've ameliorated relations between his men and Obama's.