The announcement was made by Florian Zitzlsperger, head of Brand Partnership and Sports Marketing for Audi, on Friday, Oct. 26, at the 2012-13 World Cup openers in Soelden, Austria. 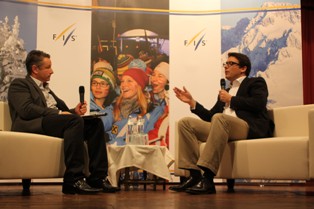 Florian Zitzlsperger (right), head of Brand Partnership and Sports Marketing for Audi, announces that the German automaker will serve as the Presenting Sponsor of the 2015 FIS Alpine World Ski Championships in Vail and Beaver Creek as FIS Forum Alpinum moderator Nick Fellows (left) looks on.

“Not only are they an exceptional world class brand, but they are obviously passionate about skiing and ski racing. We are very much looking forward to working with Audi on 2015 and creating an exceptional event platform and experience for their brand to shine.”

The overall presenting sponsor for the men’s and women’s FIS Alpine Ski World Cup race circuits since 2002 and the automobile sponsor for the U.S. Ski Team since 2007, Audi’s role with the FIS Alpine World Ski Championships dates back to 2003 in St. Moritz, Switzerland.

The sponsorship was facilitated by Tridem Sports AG, the Swiss-based sports management and rights agency responsible for securing the seven top-level sponsors for the 2015 World Championships.

“We are very pleased that Audi has chosen to enhance their role in alpine skiing as the Presenting Partner for the 2015 World Championships,” said Tridem Sports’ founder and CEO Christian Pirzer. “We look forward to working closely with Audi and the 2015 Vail/Beaver Creek Organizing Committee to put on a most memorable Alpine World Ski Championships.”

One of Europe’s leading energy companies, Vattenfall supplies electricity, heat and gas to its geographic core markets of Sweden, Germany and the Netherlands. The company is striving to be climate-neutral by 2050, which involves the reduction in CO2 emissions from existing operations, as well as dramatic increases in generation of electricity with low-CO2 intensity.

Since the release of its inaugural collection in 1997, Stockholm designer J. Lindeberg has successfully combined fashion and sportswear. The company’s main line, as well as its progressive golf and ski collections, is sold worldwide in over 30 countries. J. Lindeberg will provide the Organizing Committee and volunteer uniforms for the 2015 Championships.

The Heinrich Deichmann-Schuhe GmbH & Co. KG is a German shoe retail chain, established in 1913. Two generations and almost a century later, the company has developed into Europe’s market leader, currently active in 21 countries with approximately 3,000 local shops and 30,000 employs.

Based in Saint-Imier, Switzerland, since 1832, Longines is celebrating 180 years of non-stop craftsmanship in 2012 and its watchmaking expertise reflects a strong devotion to tradition, elegance and performance. It has generations of experience as the official timekeeper at World Championships and as a partner of international sports federations.

Scheduled from February 2-15 of 2015, the FIS Alpine World Ski Championships in Vail and Beaver Creek are expected to showcase athletes from more than 70 nations, with an estimated 750 million worldwide television viewers and an onsite media and broadcast entourage of approximately 1,500 members.