Vonn to join teen sensation this weekend in Austria

"I've had seven days of training in Soelden since Oct. 1, and it's been really good," said Shiffrin, 16. "Every second I'm able to train on snow is a second I'll take. Being here is definitely helping me work out the pre-race jitters well before race day."

Shiffrin is looking to build on last season's success when she stepped onto her first World Cup podium by finishing third in a slalom in Lienz, Austria, in December -- the same race where 15-year veteran Sarah Schleper of Vail announced her retirement. 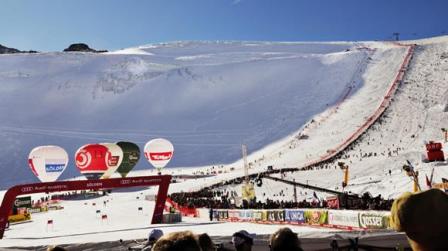 Soelden is home to the U.S. Ski Team European Training Base, and Shiffrin is back on snow for the first time since an August training block in New Zealand.

"The conditions have been rugged, which is exactly what I need right now," Shiffrin said. "The race hill in Soelden is one the toughest giant slalom races all year, and I'm going to be starting quite a bit back so I'm learning how to handle the ruts and the bumps."

Shiffrin has been training with veteran Resi Stielger, who's returning to snow for the first time since ACL surgery following the March World Cup Finals. They will be joined this weekend by four-time World Cup overall champion Lindsey Vonn of Vail and three-time Olympic medalist Julia Mancuso, of Squaw Valley, Calif.

Shiffrin, Vonn and Mancuso will race the Oct. 27 World Cup opener in Soelden, where Vonn is the defending champion.