After a heavy, monsoonal downpour last July, a large amount of silt and debris was washed into the Colorado River below Dotsero and through the Glenwood Canyon, eventually killing several thousand fish in this section. 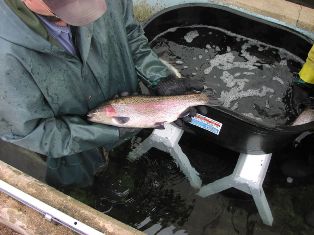 "We have received recent reports from anglers that fishing has been unproductive and trout seem to have declined since the fish kill," said Aquatic Biologist Kendall Bakich. "Stocking these Hofer rainbows will not only replenish the population; it will establish a whirling disease resistant fish that anglers can enjoy into the future."

Whirling disease, a serious physical condition in some species of trout and salmon is caused by a parasite found in the water. Severely infected young trout often develop deformities of the skull and spinal column. In some areas of Colorado, most of the young wild rainbow trout die 3 - 6 months after infection.

"The fish kill in July was unfortunate, but it has provided an opportunity to stock this disease resistant strain of rainbow trout," said Perry Will, Area Wildlife Manager in Glenwood Springs. "Anglers fishing in this section of the Colorado River will certainly benefit from this effort."

Hofer rainbow trout originated from the Kamloops rainbow trout found in the Columbia River system. In the late 1800s, these fish were transported to Germany where they were grown as food fish in local hatcheries. Because whirling disease is common in Germany, the fish were reared in whirling disease-positive waters. Over time, this strain developed a resistance to the parasite.