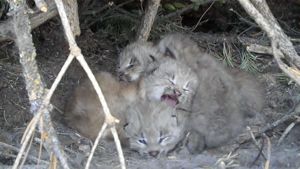 The birth rate for lynx is outpacing their mortality in Colorado causing wildlife officials to today declare the state's 11-year-old reintroduction program a success.

After their eradication in the early 1970s from trapping, poisoning and development pressures, the lynx were reintroduced from Alaska and Canada to Colorado in 1999. Colorado Division of Wildlife Director Tom Remington said the state's lynx reintroduction project has accomplished its goal of establishing a breeding population in the Southern Rockies and that biologists are now transitioning to monitor the cats' long-term persistence in Colorado's high country.

The announcement follows the discovery this spring of 14 lynx kittens in five separate dens, including the first two dens documented in Summit County, outside the core reintroduction area. Between 2003 and 2010, researchers said they documented at least 141 lynx kittens born in Colorado.

"The Division of Wildlife has a long tradition of restoring and recovering native species in Colorado," Remington said. "This is a tradition that ranks among the division's finest achievements. I applaud the wildlife professionals whose commitment and expertise have made the lynx project a success.”

"Protecting and enhancing Colorado's wildlife heritage takes hard work and dedication," the governor said. "I commend the Division of Wildlife for this accomplishment. It's an example of what we can do when we have a vision and the will to see it through."

From 1999 to 2006, officials introduced a total of 218 lynx, monitoring them with radio and satellite collars.

“The mid-sized lynx has proved adept at adjusting to Colorado's rugged mountains, finding both food and habitat necessary for successful reproduction in at least six of the past eight years,” the DOW wrote in a press release.

“Lynx reproductive rates have varied greatly since kittens were first documented in 2003. After den visits identified 16 kittens in 2003, researchers found 39 kittens in 2004; 50 kittens in 2005; 11 kittens in 2006; 11 kittens in 2009; 14 kittens in 2010. During the 2006, 2009 and 2010 seasons, DOW field crews documented that Colorado-born lynx had successfully produced third-generation Colorado kittens. In 2010, researchers estimated that between 30 and 40 percent of female lynx bore litters of kittens. DOW biologists suggest the lack of documented reproduction in 2007 and 2008 and the variability in the number of kittens produced by collared females year-to-year is consistent with what researchers know of lynx populations in their traditional strongholds in the northern boreal forest.” 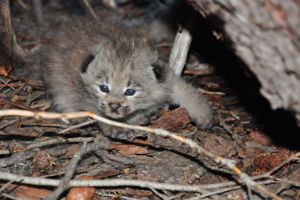 A lynx kitten
Division of Wildlife

Lynx primarily feed off snowshoe hares in the winter and their cyclical populations can be tied to their abundance. State researchers say 2007 and 2008 represent low years in snowshoe hare abundance. Their traditional secondary food source is red squirrels. Scat analysis suggests squirrels made up 66 percent of lynx diets, according to researchers.

"What we've seen from lynx in Colorado is exactly what we'd expect to see from lynx in their northern habitat," said retired DOW biologist Tanya Shenk, the lead researcher on Colorado's lynx project from 1999 to 2010. "This supports our strong belief that the habitat in Colorado will sustain lynx over the long term." 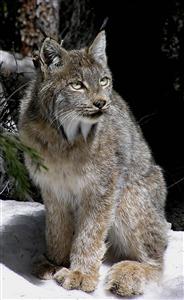 A grown lynx
Division of Wildlife

Biologists will monitor lynx “using minimally invasive techniques like trail cameras, snow-tracking and genetic sampling to monitor the presence or absence of lynx in established and potential habitats. This will replace the strategy of capturing and collaring individual lynx to gain detailed knowledge of their movements, habits and fate. The new approach will give biologists a better understanding of the lynx population throughout Colorado, although yielding less data on individual cats,” the DOW wrote.

Lynx became listed as an endangered species in 2000, a year after Colorado launched its reintroduction.

State biologists believe lessons learned from lynx could be used to reintroduce wolverines.

i'm happy to read this. however, the existence of the lynx was established by biologists and verified by fish and wildlife back in 1999. while the cat was not as prolific then, it was hunting prey in the backbowls and the evidence was pushed aside in a frenzied rush to develop what is arguably a beautiful place to ski. at least one government employee, a longtime Denverite, was relocated for being truthful. well, at least the cat is thriving. god forbid it ever get in the way of progress and big money again.