RealAspen News and Community Content Feed
By Real Vail
Real Aspen – August 26, 2012
In a battle between the seasoned veterans and the newcomers, Stage 7 of the 2012 USA Pro Challenge came down to a matter of seconds in the Individual Time Trial that saw veteran Christian Vande Velde (USA) of Garmin-Sharp-Barracuda take home the overall win.

In the “race of truth,” Taylor Phinney (USA) of BMC Racing Team put up an impressive time of 17'25”50 to claim the final stage win of 2012 in front of a monumental crowd in downtown Denver. Vande Velde took second in the stage, followed by Tejay van Garderen (USA) of BMC Racing Team. In the overall, van Garderen took second, followed by Levi Leipheimer (USA) of Omega Pharma-QuickStep.

“I was really excited yesterday after I stole some time from Tejay van Garderen and was able to keep close to Levi Leipheimer. It was an amazing race, straight to finish,” said Vande Velde. “The opportunity to participate in a race like this, of this caliber is a beautiful thing. As long as there are races like the USA Pro Challenge in America, I want to race as long as I can. The crowds are so positive and so happy.” 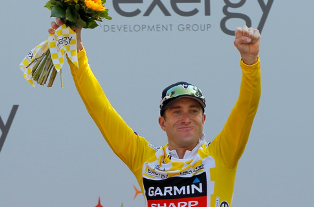 After a tough week of racing over mountains at high altitude and with the top-10 riders only separated by about 52 seconds, the Stage 7 Individual Time Trial was anyone's race. By removing the team factor, the flat and fast course in downtown was a tough individual test and a fight for the General Classification.

Using many of the same roads as the final Denver finish circuits of 2011, the 9.5m/15.3km course started and ended near the State Capitol Building in Denver's Civic Center Park. The riders first faced a familiar out-and-back section along Speer Blvd. and Colfax Ave., with a slight detour through the entertainment district along Larimer St. Returning toward the start area on Colfax, they turned north to 17th Ave. to a long section of straight road, eventually delivering them to City Park. A short, but technical run through the park returned the riders to 17th Ave., allowing the huge crowds of spectators to see their favorite riders pass by again. Two quick turns put the riders back on Broadway headed south to the finish line adjacent to Civic Center Park.

With each rider besting the man before him, U.S. National Time Trial Champion Dave Zabriskie (USA) Garmin-Sharp-Barracuda posted the first time that stuck at 18'10”74, which would eventually put him in tenth place overall. That was until Phinney, who hit the block 26th today, and rode at an average speed of 32.7 mph, crossed the line with a 17'25”50, a time that would stick for the rest of the day and give him the final stage win of 2012.

“I'm beyond excited to win today. It's a great honor to win in the final stage of the USA Pro Challenge,” said Phinney. “This was one of the best weekends of my life. Coming into Boulder the crowds just kept getting bigger and bigger; I was getting teary-eyed.”

For most of the day the top-3 would be Phinney, Peter Velits (SVK) of Omega Pharma-QuickStep and Tom Zirbel (USA) of Optum Pro Cycling p/b Kelly Benefit Strategies. That was until Tom Danielson (USA) of Garmin-Sharp-Barracuda logged a time of 17'54”62 to take third and knock Zirbel down to fourth.

With the day coming to a close and the top-ranked riders getting ready to head out on their test against the clock, the results between Vande Velde, van Garderen and Leipheimer at the splits were close and everyone was watching to see who would take the win. In the end Vande Velde finished ahead of the other two GC contenders to take home the overall win.

“We have some of the best cyclists in the world racing in Colorado,” said Shawn Hunter, CEO of the Pro Challenge. “This is one of the biggest stage races in the history of our country. We call this America's race, and it really is. The crowds were even bigger than they were last year; Golden to Boulder was pretty magical. I can't wait for 2013 and we are already talking about routes.”

Last year's fifth place finisher George Hincapie (USA) of BMC Racing Team, who is a former three-time national road champion and holds the record for participating in the most Tour de France races (17), capped off his professional cycling career today with the 2012 USA Pro Challenge.

“I really felt the emotion from the crowd and this is what's gotten me through the last several years,” said Hincapie. “The support from all of you is amazing and I'm so happy for this to be my last race ever.

The final jerseys of the 2012 race were awarded this afternoon under blue skies in downtown Denver. Vande Velde re-claimed the Exergy Leader Jersey. Several other jersey winners remained unchanged, with Jens Voigt (GER) of RadioShack-Nissan-Trek retaining the Nissan King of the Mountains Jersey (no points were awarded today), Tyler Farrar (USA) of Garmin-Sharp-Barracuda the Waste Management Sprint Jersey and Joseph Lloyd Dombrowski (USA) of Bontrager Livestrong Team the Aquadraat Best Young Rider Jersey. Tom Danielson (USA) of Garmin-Sharp-Barracuda was awarded the Evolve Most Aggressive Rider Jersey for his overall effort throughout the week.

Hey what a brilliant post I have come across and believe me I have been searching out for this similar kind of post for past a week and hardly came across this. Thank you very much and will look for more postings from you. CNPR

I'm constantly searching on the internet for posts that will help me. Too much is clearly to learn about this. I believe you created good quality items in Functions also. Keep working, congrats! 꽁머니이벤트

You make so many great points here that I read your article a couple of times. Your views are in accordance with my own for the most part. This is great content for your readers. 먹튀검증업체

I know your expertise on this. I must say we should have an online discussion on this. Writing only comments will close the discussion straight away! And will restrict the benefits from this information. bigg boss vote

I appreciated your work very thanks 먹튀사이트

I can’t believe focusing long enough to research; much less write this kind of article. You’ve outdone yourself with this material without a doubt. It is one of the greatest contents. paypal phone number

Hi! I could have sworn I've been to this blog before but after checking through some of the post I realized it's new to me. Anyhow, I'm definitely glad I found it and I'll be bookmarking and checking back often!
먹튀폴리스

Hello there, I discovered your web site by way of Google whilst looking for a related topic, your site got here up, it seems to be good. I have bookmarked it in my google bookmarks.

Thank you for all your valuable hard work on this website. Betty takes pleasure in engaging in research and it’s really obvious why. I learn all relating to the lively way you render rewarding items on this blog and even improve contribution from the others on this concept so my princess is without a doubt starting to learn a lot of things. Take pleasure in the rest of the year. You have been doing a dazzling job.
먹튀검증

An example of this is Atypical Mole Syndrome. This syndrome brings about a tendency inside the physique to kind an abnormal amount of moles on our skin. This is some thing that we could have obtained from our parents or our grandparents and we’ve no manage over regardless of whether we obtain it or not.
카지노가입쿠폰

It’s quite hard to find a good site. And I think I am lucky enough to have come here. The posts are doing great and full of good insights. I would be glad to keep on coming back here to check for updates!
안전바카라사이트

You created some decent points there. I looked online with the problem and discovered most individuals should go together with with all your website.
메이저놀이터

This would be the right weblog for anyone who wants to learn about this topic. You understand a whole lot its nearly hard to argue to you . You definitely put a fresh spin on the topic thats been revealed for many years. Wonderful stuff, just wonderful!

Thanks for some other fantastic post. The place else may just anyone get that type of information in such an ideal method of writing? I have a presentation subsequent week, and I’m at the look for such information.
카지노사이트

I am typically to blogging and i also really appreciate your posts. The article has truly peaks my interest. I’m going to bookmark your site and keep checking for first time details.
해외문자

Youre so cool! I dont suppose Ive read anything this way just before. So nice to get somebody with many original ideas on this subject. realy i appreciate you for starting this up. this website is one thing that is needed online, someone with some originality. valuable project for bringing something new for the internet!
메리트카지노

I’d should seek advice from you here. Which is not something It’s my job to do! I quite like reading an article that will make people believe. Also, many thanks permitting me to comment!
먹튀검증

I will right away grasp your rss as I can not to find your email subscription link or newsletter service. Do you have any? Kindly allow me recognise in order that I may subscribe. Thanks.
안전놀이터

Oh my goodness! an amazing article dude. Thanks a ton However I will be experiencing problem with ur rss . Do not know why Can not join it. Will there be any person getting identical rss dilemma? Anyone who knows kindly respond.
카지노사이트

I want to show my thanks to you just for rescuing me from such a predicament. Because of looking throughout the world wide web and coming across thoughts that were not helpful, I thought my entire life was well over.
먹튀검증

Hair Getting regular trims is essential. Using a smoothing serum that works for your hair can do wonders to make your hair shiny and lovely inside a flash. Combined with a ceramic flat iron, your hair will look shiny and silky smooth in minutes, even if you didn’t eat correct or get enough rest.

Good day very cool site!! Man .. Excellent .. Superb .. I will bookmark your website and take the feeds additionally¡KI’m glad to seek out numerous helpful info here in the put up, we need work out extra techniques in this regard, thanks for sharing. . . .
먹튀폴리스