RealAspen News and Community Content Feed
By Real Vail
Real Aspen – August 24, 2012
COLORADO SPRINGS -- With the riders reaching speeds of up to 42 mph, Stage 5 of the 2012 USA Pro Challenge came to an exciting conclusion with Tyler Farrar (USA) of Garmin-Sharp-Barracuda taking the win to the cheers of huge crowds in Colorado Springs.

He was followed close behind by Taylor Phinney (USA) of BMC Racing Team in second and Alessandro Bazzana (ITA) of Team Type 1-SANOFI in third. In what is still a very close race for the Exergy Leader Jersey, Tejay van Garderen of BMC Racing Team maintained his lead heading into the penultimate day of racing.

“The crowds have been unbelievable,” said van Garderen. “It's really incredible how much the USA Pro Challenge has grown since last year.”

The riders took off from Breckenridge on a 117.9m/189.7 km route that would include one Cat. 1 Nissan King of the Mountains competition at Hoosier Pass (11,541 ft.) and two Waste Management Sprints at Fairplay and Woodland Park on their way to the finish in downtown Colorado Springs that would include three circuit laps. 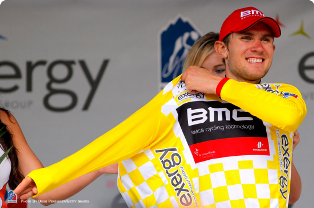 With the KOM coming only 10.1 miles into the stage, the riders started out aggressively launching an attack almost immediately after heading out of the neutral section. With nine riders in the break, Francisco Jarley Colorado Hernandez (COL) of EPM-UNE crossed the line at the top of Hoosier Pass first to take max points, followed closely by Sergey Firsanov (RUS) of RusVelo and Biao Liu (CHN) of Champion System Pro Cycling Team.

With seven riders remaining in the break heading down from the KOM, including Firsanov, Liu, Oliver Zaugg (SUI) of RadioShack-Nissan-Trek, Vincenzo Nibali (ITA) of Liquigas-Cannondale, Ivan Santaromita (ITA) of BMC Racing Team, Carter Jones (USA) of Bissell Pro Cycling and Yevgeniy Nepomnyachshiy (KAZ) of Astana Pro Team, they quickly approached the first sprint of the day. Crossing the line first in Fairplay was Firsanov, followed by Zaugg in second and Liu in third.

With the gap reaching more than five minutes at times, the UnitedHealthcare Pro Cycling Team and Garmin-Sharp-Barracuda riders were doing a lot of the work at the front of the peloton in an effort to close the gap. And to the cheers of huge crowds lining the second sprint in Woodland Park, the riders posted similar results to the first sprint with Firsanov in first, followed by Liu and Jones.

Upon reaching majestic Garden of the Gods, Jones launched an attack, but was reeled back in quickly by Nibali who, in turn, launched a counter-attack and was soon joined by Zaugg and Firsanov. As the riders reached downtown Colorado Springs, the rest of the breakaway was absorbed by the peloton leaving only the three leaders out in front, but with average speeds on the circuits reaching 30 mph, the group was soon altogether again. And in an all-out sprint to the finish, Farrar took home the stage win, his second of the 2012 race.

“This was the day I had always marked, and the team did a lot of work to make sure that it all worked out,” said Farrar. “We spent a lot of energy today that we could've conserved, but I'm thankful they put their faith in me to win.”

“The level of racing we have been seeing in the USA Pro Cycling Challenge over the past couple of days is phenomenal,” said Shawn Hunter, CEO of the USA Pro Challenge. “The riders are getting a chance to really showcase their skills and the fans throughout the State of Colorado have been unbelievably supportive and enthusiastic in response. We're returning to a city that had incredible crowds in the inaugural year – Golden – and we all know the significance of Flagstaff Mountain, so tomorrow should be a great day of racing.”

Stage 6 will depart from Golden, a second-year host city and site of one of the largest crowds in the 2011 race, but not before several circuit laps around downtown provide fans with the chance to cheer on their favorite riders. The peloton will then head north on CO 93 en route to Boulder, a city very well known for its bicycle culture. Upon arrival in downtown Boulder, the sprinters will have an opportunity to earn valuable points with a sprint line adjacent to the Pearl Street Mall and the USA Pro Challenge expo area.

After the sprint points have been awarded, the route will head up Boulder Canyon along CO 119 towards Nederland and the day's first KOM competition. Joining the cycling fans in this small mountain town will be the 14th Annual Nedfest, a music, arts and microbrew festival. Riders will continue climbing as they are faced with ascents exceeding 9,300 ft. on the incredible Peak to Peak Highway before a long and fast descent into the town of Lyons, where they will encounter another sprint line and the annual Rocky Mountain Folk Festival.