RealAspen News and Community Content Feed
By Real Vail
Real Aspen – August 23, 2012
In an impressive solo breakaway that began less than an hour into Stage 4 of the 2012 USA Pro Challenge, Jens Voigt (GER) of RadioShack-Nissan-Trek powered through the 97.2-mile course to take home the win in front of massive crowds lining the uphill finish in Beaver Creek.

More than five minutes later, the peloton crossed the finish line with Andreas Kloden (GER) of RadioShack-Nissan-Trek and Tejay van Garderen (USA) of BMC Racing Team taking second and third, respectively. In what has been a daily battle to the second for the overall lead, van Garderen reclaimed the top spot and will wear the Exergy Leader Jersey for a second day tomorrow.

“It's a huge honor for me to be in the Exergy Leader Jersey in my home state.,” said van Garderen. “I've lived here a long time now, and this is definitely home for me. I love being here, racing here and seeing the crowd.”

Stage 4 of the race kicked off this morning in Aspen and took the riders back over Independence Pass and through two other Nissan King of the Mountains competitions and two Waste Management sprints. 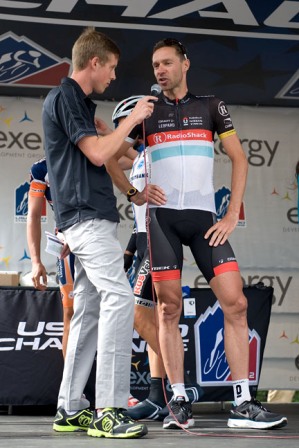 As the riders headed out of town and almost immediately began the climb back up Cat. 1 Independence Pass (12.095 ft.), a breakaway of about 16 riders formed off the front, which included Voigt and KOM contender Camilo Castiblanco (COL) of EPM-UNE. As they continued up the climb, Voigt pulled away on a solo breakaway, followed by a couple of chase groups that would eventually merge before cresting the top of the summit.

With a solid five-minute lead, Voigt crossed the line at the top of fan-packed Independence Pass first to take maximum points. In an effort to gain some ground in the KOM competition, Castiblanco struck out on his own from the chase to take second place, followed by Lachlan David Morton (AUS) of Garmin-Sharp-Barracuda in third.

“When I got to Independence Pass, there were so many spectators cheering me on that I forgot the pain, and tried not to lose momentum on the descent,” said Voigt.

On the descent, the riders formed more clearly defined groups with Voigt off the front, a group of chasers that were at one point his breakaway companions 2:25 behind him and the peloton, trailing by a full 6:35.

With a commanding lead, Voigt was the first to cross the Waste Management sprint in Leadville, followed by Lachlan David Morton (AUS) of Garmin-Sharp-Barracuda and Rubens Bertogliati (SUI) of Team Type 1-SANOFI. Moving toward the next KOM of the day, the chase group was swallowed up by the peloton, leaving only Voigt left out in front.

After an unsuccessful attempt by the Liquigas-Cannondale riders to reel Voigt in, he headed over Cat. 3 Battle Mountain (9,239 ft.) to take the max points, followed by Castiblanco and Javier Eduardo Gomez Pineda (COL) of EPM-UNE. Next faced with the last sprint of the day in Minturn, Voigt took first, with Tyler Farrar (USA) of Garmin-Sharp-Barracuda coming in second and Damiano Caruso (ITA) of Liquigas-Cannondale in third.

With riders getting dropped from the back of the main field as they picked up the pace toward the finish, Voigt took the stage win to the cheers of enthusiastic fans in Beaver Creek.

“I got an extra minute, then six, and from then on the only thing that could stop me was a deer running into my bike!,” said Voigt. “I started to raise my hopes, and even realized that I had enough time to slow down and enjoy it. I just soaked up the emotions from the crowd. It was a hard day, but a very happy day.”

“The enthusiasm shown by the pros participating in the 2012 USA Pro Challenge and the incredible crowds of fans lining the route each day is simply amazing,” said Shawn Hunter, CEO of the Pro Challenge. “The level of competition that is being displayed here on the streets of Colorado – evidenced by how close the standings remain after four days of intense racing – is quite a sight to see.”

Stage 5 will see two returning host cities, but in new roles. A rude awakening is the only way to describe the start of Stage 5 in Breckenridge. After a short, flat section through downtown, the riders will have to face the daunting 10-mile climb up Hoosier Pass, which tops out at 11,500 ft. The summit is followed by a fast descent into Fairplay and with that, the high mountains are left behind and a day for the sprinters and breakaway specialists awaits. A fast rush across Colorado's high plains ends with a Sprint Line in Woodland Park where the riders may hit their fastest speeds of the week, and from there they continue downhill to Colorado Springs through the shadow of Pikes Peak. Once in Colorado Springs, the route will take a technical uphill run through the Garden of the Gods, home of the 2011 Prologue. From there the route takes a quick downhill run to downtown for the 2012 race's only finishing circuits. With the peloton passing through the finish line three times as they blast around downtown Colorado Springs, spectators will be treated to a thrilling elbow-to-elbow competition that can reach up to 35 mph.

Fans can view the race on the daily NBC Sports Network and NBC broadcasts. Stage 5 will air live on NBC Sports tomorrow at 2 p.m. MT.