“I'm incredibly proud of the team and what we did today, and every day,” said Vande Velde. “Especially with how aggressive we've been. If nothing else, it has been a rewarding and fruitful experience.”

With the peloton chasing Danielson down Independence Pass and into the streets of Aspen, Damiano Caruso (ITA) of Liquigas-Cannondale claimed second in the stage and Jakob Fuglsang (DEN) of RadioShack-Nissan-Trek took third on a course packed with cheering fans. 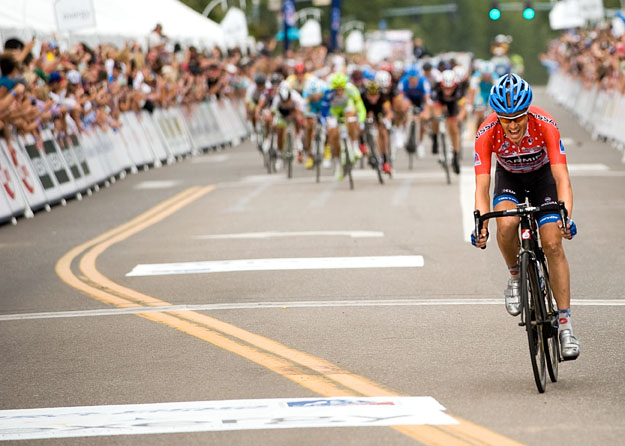 Tom Danielson finishes just ahead of the peloton in Aspen.
Stefanie Michejda

Stage 3 took the riders on a 130.6 mile ride from Gunnison to downtown Aspen, facing them with the two epic passes of Cottonwood and Independence Pass. After rolling out of a neutral start in Gunnison, the riders showed they were ready to compete, immediately reaching speeds of 35 mph.

The BMC Racing Team led the front of the field, riding hard and trying to make sure the break didn't get too far up the road as the riders approached the first Nissan KOM of the day – Cat. 3 Taylor Park (9,526 feet). Camilo Castiblanco (COL) of EPM-UNE took max points, followed by Team Exergy riders Serghei Tvetcov (MOL) and Matt Cooke (USA).

As the riders approached the second KOM of the day – Cat. 1 Cottonwood Pass (12,126 feet) – there was some reshuffling in the break with Anthony trying to make a move, getting caught and Tvetcov, Reijnen and Valerio Agnoli (ITA) of Liquigas-Cannondale all dropping back to the peloton.

Colorado Hernandez reached the top of the Pass first, followed by Danielson and Zabriskie. And as things started to settle down after the KOM, Michael Friedman (USA) of Optum Pro Cycling p/b Kelly Benefit Strategies joined the break.

At the next Waste Management sprint in Buena Vista, Zabriskie crossed the line first, followed by Louder and Danielson. Shortly after, riders started to fall off the break and get absorbed back into the peloton. First it was Aru and Friedman. Then, after doing a good part of the work all day, Zabriskie, followed quickly by Louder.

With only two riders left into the break heading toward the final KOM of the day – Cat. 1 Independence Pass (12,095 feet) – tensions started to grow, but Danielson attacked in advance of the KOM setting him up to take max points and secure the Nissan King of the Mountains Jersey for another day. He was followed by Colorado and Freddy Orlando Piamonte Rodriguez (COL) of EPM-UNE as a wall of enthusiastic fans cheered them on at the top of the climb.

“That was awesome! Since I'm a Colorado guy, there's a lot of responsibility there,” said Danielson. “I've dreamed about going over Independence Pass and for it to come true the way it did is something I'll never forget.”

With Danielson now on a solo mission headed straight for the finish in Aspen, the peloton took chase and narrowed the gap significantly to only a matter of seconds, but it wasn't enough to catch the Colorado resident, and Danielson took the stage win.

“Today was as good as it gets when it comes to elite professional bike racing,” said Shawn Hunter, CEO of the Pro Challenge. “The riders kept us on the edge of our seats and the massive crowds along the route and at the top of the passes really set the stage for the race.”

Elevation is the main story for Stage 4 because with much of the course above 9,000 feet, it will be anything but easy. Those who conquered Independence Pass on Stage 3 will see it again very early in Stage 4, with the climb starting almost immediately after several neutral start laps in downtown Aspen. Unlike the previous day, the climb may not decide the winner, but will be an ideal launching point for a breakaway or possibly an overall contender to lose time.

Anyone who is brave enough to attack over Independence Pass will be faced with more than 75 miles of racing at altitude. Along the way they will compete for a sprint in the historic town of Leadville, the highest incorporated city in the United States at 10,152 feet. Next on the agenda will be the climb over the Continental Divide at Tennessee Pass (10,424 feet) before descending into Minturn and tackling the rolling run toward the final climb to Beaver Creek. Passing through the 2011 start city of Avon, the peloton will be faced by a stiff 2.5-mile climb that rises almost 1,000 feet to the ski resort of Beaver Creek. Although not the fiercest climb on the route, the finale is sure to produce exciting racing, especially among those fighting for the overall lead.

Fans can view the race on the daily NBC Sports Network and NBC broadcasts. Stage 4 will air live on NBC Sports tomorrow at 2 p.m. MT.