RealAspen News and Community Content Feed
By Real Vail
Real Aspen – August 21, 2012
Stage 2 of the 2012 USA Pro Challenge featured a challenging ride under blue skies with an unexpected finish, as Tejay van Garderen (USA) of BMC Racing Team pulled through to take the stage win and the overall lead.

Following close behind were Christian Vande Velde (USA) of Garmin-Sharp-Barracuda in second and Ivan Rovny (RUS) of RusVelo in third. After today's performance, van Garderen takes the overall lead to claim the Exergy Leader Jersey.

“I wasn't going into the last 4 km thinking I was going to win, but I knew I was going to try,” said van Garderen. “When I looked over my shoulder and I saw Christian Vande Velde on my wheel, I thought he was in a perfect position to outsprint me, but at this altitude, I think he may have had trouble with his acceleration.” 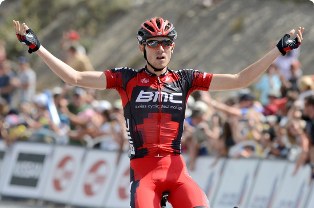 Reaching impressive average uphill speeds of 25 mph, the riders gave it their all to keep the competition going strong heading into returning host city Crested Butte.

“Today was another really great day of racing, under the amazing backdrop of Montrose, Crested Butte and all the cities in between,” said Shawn Hunter, CEO of the Pro Challenge. “The 2012 USA Pro Challenge is going to take these riders to new heights, and from what we've seen so far the riders and the fans are ready for it.”

An early break of about 30 riders wouldn't stick, but did lead to a smaller group of 12 tearing off the front to form a breakaway that would last up until the last minutes of the stage. The original break consisted of the following riders:

Heading into the first climb of the day – Cat. 3 Cerro Summit (7,973 ft.) – Castiblanco pulled away from the group to take max points, followed by Cooke and Nibali, but then was absorbed back into the group. Continuing into the second KOM – Cat. 3 Blue Mesa Summit (8,719 ft.) – a similar situation unfolded with Castiblanco, Cooke, Lewis taking first, second and third, respectively.

Continuing on, the riders approached the first Waste Management sprint line of the day in Gunnison, which will also play host to start of Stage 3 tomorrow. Crossing to the cheers of enthusiastic crowds lining the route, the maximum points went to Howes, followed by Baldwin and Lewis.

In an unfortunate accident, Ben King (USA) of RadioShack-Nissan-Trek, Georg Preidler (AUT) of Team Type 1-SANOFI, Rubens Bertogliati (SUI) of Team Type 1-SANOFI and Sergey Klimov (RUS) of RusVelo hit the deck at the back of the peloton, but all were able to recover and finish out the stage.

With the stage nearing the finish, the break was reduced to nine riders after Voigt, Nibali and El Fares fell back to the peloton. In a last effort, with about 3 km to go, Castiblanco attacked the break, but was brought back in by Frank. And in an unexpected last minute push, van Garderen came out of nowhere with Vande Velde on his wheel, to take the stage win and the overall lead.

“I am really happy with my ride today and very proud of how the team is riding here in Colorado,” said Vande Velde. “As an American team based in Boulder, this race is a special one for us. The team is ultra-motivated, we've animated the race the first two days and we hope to continue to do so as the week goes on.”

In 2011, U.S. stage racing saw one of its toughest days with the ride from Gunnison to Aspen and in 2012 the “Queen Stage” will again feature two of the highest climbs in professional racing. The stage starts in downtown Gunnison with a short neutral section leading out of town; however, as soon as the racing begins, so do the challenges. Just after the first right turn the riders face the first Sprint Line of the day in the small community of Almont. This will most likely be the last time the true sprinters will play a part in this stage, as the race quickly turns uphill and heads toward the first King of the Mountain (KOM) of the day near Taylor Park Reservoir.

A short, flat section on the north side of the reservoir will be the last pavement the field will see for almost 14 miles, as the dirt climb that follows will take the race to 12,126 ft. and the highest point of the week at Cottonwood Pass. A beautiful, twisting descent will take the peloton down into the town of Buena Vista and the second sprint line of the day before heading north on US 24 to Twin Lakes. The left turn toward Twin Lakes will show the field what is to come as they see the massive ridge in front of them. Although the climb up Independence Pass is paved and not quite as high as Cottonwood, it is sure to produce fireworks again this year. Lined with fans in 2011, the climb to 12,095 ft. caused several gaps in the field that led to an exciting finish in Aspen, which will no doubt be duplicated in 2012.

Fans can view the race on the daily NBC Sports Network and NBC broadcasts. Stage 3 will air live on NBC Sports tomorrow at 2 p.m. MT.