RealAspen News and Community Content Feed
By Real Vail
Real Aspen – August 20, 2012
Tyler Farrar (USA) of Boulder-based Garmin-Sharp-Barracuda took home the first stage win of the 2012 USA Pro Challenge after a battle to the finish over 125.7 miles from Durango to Telluride.

In a difficult first stage complete with two Waste Management sprints and three Nissan King of the Mountains competitions, the day ended with an all-out sprint to the finish, which saw Alessandro Bazzana (ITA) of Team Type 1-SANOFI take second and Damiano Caruso (ITA) of Liquigas-Cannondale claim third.

“We knew we had the top riders in the world racing in the 2012 USA Pro Challenge, but today, with the competitive level of racing we saw right out the gate, they showed they're here to win,” said Shawn Hunter, CEO of the Pro Challenge. “We saw impressive crowds cheering on the riders at the start line in Durango all the way to the packed streets of Telluride this afternoon. We have an exciting race ahead of us.” 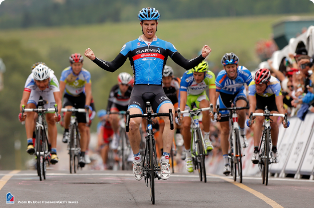 Comprised of 16 teams and 124 riders, which include reigning champion Levi Leipheimer and 2011 Tour de France Champion Cadel Evans, the field for the 2012 race started the day with a bang. After heading out of downtown, the riders approached the first Waste Management sprint in Durango, which was taken by Nathan Haas (AUS) of Garmin-Sharp-Barracuda, Javier Eduardo Gomez Pineda (COL) of EPM-UNE and Martin Velits (SVK) of Omega Pharma-QuickStep.

And with the sprint came the first breakaway of the day consisting of a decent sizes group of 22 that included Garmin-Sharp-Barracuda riders Tom Danielson (USA), Peter Stetina (USA) and Dave Zabriskie, as well as Jens Voigt (GER) of RadioShack-Nissan-Trek and Vincenzo Nibali (ITA) of Liquigas-Cannondale, among others.

Followed by a chase group and the peloton, they approached the first Nissan KOM of the day, Hesperus, a Cat. 3 climb that took the riders up to 8,224 ft. First to the top was Andrew Bajadali (USA) of Optum Pro Cycling p/b Kelly Benefit, followed by Freddy Orlando Piamonte Rodriguez (COL) of EPM-UNE and Matt Cooke (USA) of Team Exergy.

With a break that reached up to more than five minutes, the riders headed toward the second and final Waste Management sprint line in the town of Dolores. Motivated by the cheers of fans lining the sprint, Serghei Tvetcov (MOL) of Team Exergy took the max points, followed by Josh Atkins (NZL) of Bontrager Livestrong Team and Voigt.

After an attempted attack by Nibali and Danielson, a group of 10 riders formed off the front heading into the next KOM of the day – Lizard Head Pass (10,222 ft.) – as the chase group was swallowed back up into the peloton. Danielson pulled away to take the KOM, with Eduard Alexander Beltran Suarez (COL) of EPM-UNE and Nibali following close behind.

With only six miles until the next and final KOM at Alta, Danielson and Stetina pulled away to take a 35-second gap over the rest of the break heading over the pass. Results for the KOM were Danielson, Stetina and Beltran.

With less than 10 miles to the finish, the riders stepped up the pace heading into Telluride. The gap was closed, followed by a short-lived attack by the Kings of the race –Edward King (USA) of Liquigas-Cannondale and Benjamin King (USA) of RadioShack-Nissan-Trek, and the field was brought together again for an all-out sprint to the finish in front of huge crowds of cheering fans. And in his first victory in more than a year, sprinter Farrar pulled out the win.

“This is the first time I've done a U.S. stage race since 2009,” added Farrar. “It's special as an American to race in your own country and have fans that are rooting just for you, for our team. Racing in Colorado is important, and a big bonus for us.”

In a near sweep of the jerseys for Garmin-Sharp-Barracuda, Farrar took the Exergy Leader Jersey and the Waste Management Sprint Jersey; Danielson took the Nissan King of the Mountains Jersey; and Stetina claimed Evolve Most Aggressive Rider Jersey. Gavin Mannion (USA) of Bontrager Livestrong Team was awarded the Aquadraat Best Young Rider Jersey.

At 99 miles, Stage 2 is a mix of old and new. Beginning with a new course for the first 65 miles, the race then visits familiar territory as it passes through Gunnison and retraces the 2011 route up to the grueling finish in Mt. Crested Butte. Beginning at Montrose Pavilion, the stage will begin with a quick neutral lap before the riders head east out of town. As Montrose fades into the distance, the short but challenging climbs over Cerro Summit and Blue Mesa Summit await and make for early launch pads for the breakaway specialists.

As the road levels, giving way to the picturesque twists and turns along the shores of Blue Mesa Reservoir, the riders approach the first Sprint Line of the day in Gunnison, 65 miles away from the start in Montrose. Gunnison will host the race two days in a row, first as a pass-through in Stage 2 and then as the start city for Stage 3. Moving north out of Gunnison breakaway time gaps will shrink, team leaders will move to the front and domestiques will protect and position their leaders. As the riders head into downtown Crested Butte, they'll face the day's last Sprint Line. From there it's a 2-mile climb to the line at Mt. Crested Butte. A dynamic and exciting uphill finish, this short, but steep hill gave Levi Leipheimer the leader's jersey in 2011.

Fans can view the race on the daily NBC Sports Network and NBC broadcasts. Stage 2 will air live on NBC Sports tomorrow at 2 p.m. MT.