The campaign mailer features two men leaning together and kissing. The image comes from a treasured engagement photo snapped in New York city that was stolen and reworked by an anti-gay Virginia group.

The group, the Public Advocate of the United States, dimmed the original crisp black and white shot, replaced Manhattan skyscrapers and the Brooklyn Bridge with hazy snow-covered mountains and cut across the middle of the image with words on a blood-red line intended to mock the couple and attack Republican Colorado state Senator Jean White, of Hayden. White formerly represented Vail and Eagle County in state Senate District 8, but lost a Republican primary last month in the newly reapportioned district, which will not include the Vail Valley.

The New York couple, Brian Edwards and Tom Privitere, are outraged and they engaged attorneys at the Southern Poverty Law Center to send a cease and desist letter to Eugene Delgaudio, president of the Falls Church-based group behind the mailer. 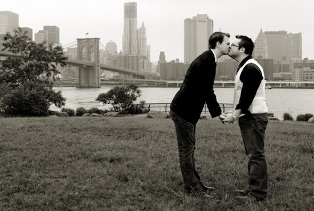 The SPLC, a civil rights organization that has battled discrimination and so-called hate groups for decades, is also representing Kristina Hill, the photographer who took the original photo of the couple.

"It appears from your public statements that you knowingly and willfully misappropriated Tom and Brian's images and Kristina's copyrighted photo for use in your homophobic mailers against Colorado state senators," wrote SPLC Deputy Legal Director Christine Sun in the letter she sent yesterday to Delgaudio. 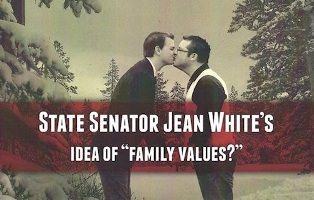 "As you are certainly aware, Brian and Tom are not public figures. That photo was a deeply personal representation of their love and commitment to one another and the obstacles they overcame to share their lives together. The use of that photo of their wedding engagement and their images to attack gay couples and their relationships as not promoting 'family values' was unfair, un-justifiable and demeaning of Tom and Brian's human dignity."

Sun told the Colorado Independent that the point of the letter is to prevent Delgaudio's group from using the image in any other planned mailers. She said that she is still investigating the claims made by her clients and that she is "open to pursuing legal action based on any future claims her clients might make based on past use of the image," meaning she is open to suing for compensation based on misappropriation of the copyrighted image and emotional distress caused by the mailer.

Delgaudio wouldn't confirm that his group used the Edwards and Privitere photo, only telling the Washington Post in a statement that he was "looking into it."

Delgaudio's group sent out the mailer attacking White during the heated Republican Party primary in District 8 she lost at the end of June to state Rep. Randy Baumgardner.

White, along with Republican Sens. Ellen Roberts from Durango and Nancy Spence from Centennial, voted in favor of civil unions legislation that would have granted gay couples many of the legal rights and responsibilities that presently apply only to straight couples.

The senators have voted as a bloc on the Republican side in favor of the bill for the last two sessions, arguing that the government should not act to restrict the personal liberties of law-abiding adults and that the children of gay couples in the state have been left in a legal limbo by lawmakers who refuse to recognize that the number of gay families will only grow with each passing year and that the children of gay couples deserve the protections afforded by child support and parental visitation laws.

The civil unions bill won majority support from lawmakers this year in both chambers of the legislature before falling to procedural strategy orchestrated by social conservative House leadership in a special legislative session.

Pro-gay and anti-gay groups in the state and outside the state ramped up political messaging activity during legislative debate over the bill and have vowed to launch major campaigns on the part of favored candidates in the run up to the election in November.

The SPLC has already designated Delgaudio's organization a "hate group." In her letter yesterday, Sun lists ways the Public Advocate has misrepresented gay Americans as a class for years.

• blamed “the homosexual agenda” for enhanced-passenger-search procedures at airports so that gay people can feel others up;

• compared marriage equality to bestiality through production of a “Man-Donkey Mock Wedding Ceremony”;

• defamed gay people as pedophiles and rapists to be feared, in reference, for example, to permitting gay scout masters, which is “the same as being an accessory to the rape of hundreds of boys”;

• demonized gay people and those suffering from AIDS as “prey[ing] on children to replenish the ‘Homo- sexual Community'”;

• provoked readers through a fundraising letter to “imagine a world where the police allow homosexual adults to rape young boys in the streets”;

• promoted harmful, discredited conversion therapy as necessary and effective to rescue gay people from their orientation; and

• mischaracterized national legislation to address an epidemic of anti-LGBT harassment at schools as “requir[ing] schools to teach appalling homosexual acts...force private and even religious schools to teach a pro-homosexual agenda...ram through their entire perverted vision for a homosexual America....create a new America based on sexual promiscuity.”

Sun said she welcomed news of other fliers created by Public Advocate featuring the image of her clients or other images used without permissions.

Read her letter to Delgaudio below: