CDOT: 'We're not getting too worried quite yet ... there are contingency plans'

RealAspen News and Community Content Feed
By David O. Williams
Real Aspen – July 12, 2012
The highly anticipated USA Pro Cycling Challenge Stage 4 route between Aspen and Beaver Creek could be in jeopardy if state highway officials can't fix a sinkhole near Tennessee Pass that has indefinitely shut down U.S. Highway 24 in both directions.

“We're not getting too worried quite yet,” said Ashley Mohr, a Colorado Department of Transportation (CDOT) spokeswoman. “There are contingency plans for the bike race in the long haul -- we're not needing to look at those quite yet.”

Stage 4, which is scheduled to begin in Aspen on Aug. 23, would travel up and over Independence Pass on Colorado State Highway 82, connect to U.S. Highway 24, travel through the nation's highest incorporated town (Leadville at 10,152 feet) and then head on over Tennessee Pass and Battle Mountain Pass before linking up with U.S. Highway 6 and ending in Beaver Creek. 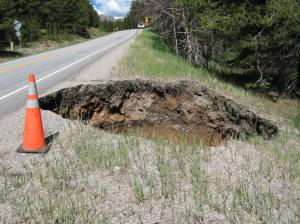 Three high-mountain passes and an uphill finish in one of the state's most scenic ski areas would possibly make Stage 4 the signature stage in the second running of the state's massively successful road-cycling stage race won last year by Levi Leipheimer. Top riders from the Tour de France and the London Olympics have already committed to the Aug. 20-26 race.

“With any live sporting event like that, there can always be a wildfire, especially in Colorado,” Mohr said, referring to other natural disasters that can force route changes. “There's always that possibility, so we do have contingency plans and backup plans in place. At this time we're not looking at that quite yet. It would be a little bit premature.”

Mohr said she could not discuss alternative routes if the sinkhole situation can't be resolved.

"We are aware of the situation on U.S. 24, and are watching it closely." USA Pro Challenge CEO Shawn Hunter said via a spokeswoman. "We are in regular communication with CDOT, and at this point there are no plans to change the route."

The Beaver Creek finish, new this year, is viewed by some as a consolation prize for the Vail Valley after losing the iconic (and ultimately critical) Vail Pass time trial stage from last year. Vail Mayor Andy Daly expressed disappointment when that stage was scrapped. Losing the Aspen to Beaver Creek stage could leave the Vail Valley entirely out in the cold.

Mohr said highway workers on Wednesday finished up a process called “coring,” in which they took soil samples from several areas near the sinkhole, which is actually a century-old railroad tunnel that collapsed decades ago but was just recently exposed by a rain-triggered sinkhole.

“Right now we just don't know how long that process is going to take depending on what we find from the analytics.”

U.S. Highway 24 is also a critical link for resort workers living in Leadville and trying to get to jobs in Vail, Avon and Beaver Creek. Those workers now must drive over Fremont Pass on Colorado State Highway 91 to Copper Mountain, then west on I-70 over Vail Pass – adding about an hour to their commute.

“However, we do realize that for folks who are trying to get from Red Cliff to Leadville that's a significant detour. It's about an hour, and so we're just trying to do our best.”

Hope the fix will be timely. lolbeans. But it is important not to ignore the quality of the road.

I hope they fix it now. It looks hazardous. We have taken many surveys from survey saga to improve it properly for betterment in the future.

Highway officials in Colorado are scrambling to fix a sinkhole that opened up on Tennessee Pass ahead of the USA Pro Cycling Challenge. home real estate Pine Rose The 60-foot-wide and 20-foot-deep sinkhole opened up on Tuesday morning, just two days before the start of the race. Officials say that the sinkhole is not a threat to the safety of the race, but they are working to fix it as quickly as possible. The sinkhole is located on a section of the highway that will be used by the cyclists during the race.