RealAspen News and Community Content Feed
By Scot Kersgaard
Real Aspen – July 2, 2012
DENVER -- The Campaign to Regulate Marijuana Like Alcohol last week pitched its ballot initiative as a way to make it more difficult for kids to get the drug.

The campaign introduced a new advocacy group, Moms and Dads for Marijuana Regulation, and unveiled a billboard in support of the initiative at 1600 Federal Blvd in the city.

The billboard features a man embracing his teen son and stating: "Please, card my son. Regulate the sale of marijuana and help me keep it out of his hands."

"Far too often, we hear opponents of reform using teens as a reason to maintain marijuana prohibition. They are simply playing on the fears of parents. The true dangers related to marijuana come from its illegal status," said Moms and Dads co-chair Georgia Edson, a Denver-based mother and licensed clinical social worker. 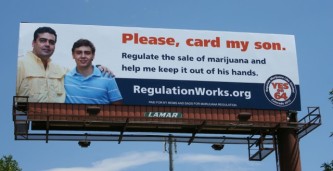 A new pro-pot billboard on Federal Boulevard in Denver.
RegulateMarijuana.org

"Like the father portrayed in the billboard, I would feel much more comfortable knowing that marijuana was being sold in regulated stores where sellers would be checking IDs," she said in a prepared statement."Marijuana prohibition is the worst possible policy when it comes to keeping marijuana out of the hands of teens. If we do not regulate marijuana across the board, we are guaranteeing that sales will be entirely uncontrolled and that those selling it will not ask for ID. We are also forcing consumers into an underground market where they are likely to be exposed to other, more harmful products," added Moms and Dads co-chair Dr. Erika Joye, a Denver-based mother and certified school psychologist.

"Under Amendment 64, all marijuana sales will be conducted in a regulated market in which checks for proof of age are mandatory and strictly enforced, and consumers will not be exposed to more dangerous products. As a child and school psychologist – and as a mom – I feel that regulating marijuana like alcohol is critical to protecting the health and safety of Colorado teens," she said.

"Marijuana prohibition relegates the growing and selling of marijuana to criminal enterprises, oftentimes including gangs and cartels," said another member of the group, former police officer Jason Thomas, an Aurora parent. "Amendment 64 will take the production and distribution of marijuana out of our neighborhoods and put it behind the counter of licensed businesses. There is a reason why we do not see alcohol being widely produced and sold out of homes in the suburbs – because it is regulated," he said in a press release.

"Because marijuana is illegal, suppliers are unable to rely on law enforcement officials to step in when business-related disputes and incidents occur. All too often, this results in violence that affects not just marijuana dealers and consumers, but the broader communities surrounding them. By regulating marijuana like alcohol we can eliminate the violence and turf battles associated with the underground market."

Roger Sherman, one of the spokespeople and organizers of Smart Colorado, the group campaigning against Amendment 64, said that legalization will not make marijuana harder for teenagers to get, but will actually make it easier.

"That message is nonsense," he said.

Both sides are quick to produce studies that support their own views.

One recent federal study shows that marijuana usage overall has gone up as states have made medical marijuana legal, but that as pot use increases, use of alcohol, cocaine and methamphetamine goes down.

Most recent polling shows that a majority of Americans and Coloradans think marijuana ought to be legal.