Lundberg defeated Weissmann by something like 2,500 votes of 40,000 cast, drawing the lion's share of his support from Larimer County residents. Lundberg lives in small-town Berthoud, in mostly rural Larimer at the east-edge of the Rockies, where Tea Party and Glenn Beck-inspired 9/12 groups have dominated grassroots politics on the right for the last three years.

Now Lundberg, who over the last decade in both chambers of the state legislature has championed social-conservative causes, often quoting from scripture to make his points, will face Boulder's openly gay Congressman Jared Polis to represent the newly diverse Second Congressional District. 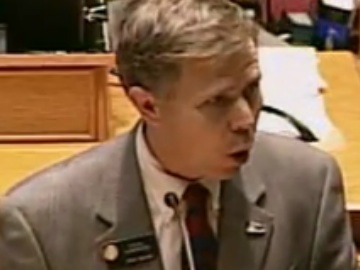 University high-tech-research town Boulder has been the heart of the Second District for years, but the district was redrawn last year to include Larimer County to the north and east. Polis currently represents Vail and all of Eagle County in the U.S. House, but under redistricting, only the eastern half of the county will be in the Second Congressional District, while the western half will be in the Third Congressional District currently represented by Republican Scott Tipton.

Weissmann is a tech entrepreneur who had never before run for office. On the stump, he downplayed social issues and hammered on the need to downsize government and to bring fiscal discipline to Washington.

"Eric thinks this district with its plurality of independent voters would best be represented by a candidate who is socially moderate and fiscally conservative," Moore told the Independent. "Eric doesn't think the government should be involved in making personal decisions for Americans. He is pro-civil unions [for same-sex couples]. He's for cutting the size and scope and intrusiveness of government. He thinks marriage is a topic best left to couples and their families and churches."

Lundberg unsuccessfully opposed repealing laws against adultery in Colorado last year. This year, he led the push to defeat a popular civil unions bill which would have granted gay couples and their families many of the rights and responsibilities now reserved for straight married couples and their families. Indeed, in the face of mounting bipartisan majority support among lawmakers for the bill, Lundberg pressed Republican House Speaker Frank McNulty to shuffle committee membership to kill the bill. McNulty waved off the suggestion as inappropriate.

The Tea Party groups that backed Lundberg in the primary played a large role in defeating Democratic Congresswoman Betsy Markey in 2010 to send then-Republican state Rep. Cory Gardner to Washington in her place. That was when Larimer was still part of Colorado's reliably conservative Fourth Congressional District.

State polls have shown that Republican views on social issues are shifting away from the kind of hardline Christian conservatism promoted in the state by major evangelical organizations such as Colorado Springs-based Focus on the Family. Many politics observers believe the state party has to evolve on issues like gay rights and contraception if it is to remain competitive in the long run.

The new Second District, which mixes rural-suburban Front Range with tourist mountain towns and two major universities-- the University of Colorado in Boulder and Colorado State University in Fort Collins-- hosts a mixed "new Colorado" constituency that Weissmann says will reject an old-school politician like Lundberg.

"Lundberg represents [parts of the district] in Denver. He has strong name recognition," said Moore, "but Eric is just more qualified to represent these constituents."

"Weissmann is popular in the diverse [parts] of the district," he told the Independent, meaning mostly the sections where the cities of Boulder and Fort Collins dominate. "[Lundberg] is popular with the Tea Party groups in the other [rural] sections, where the bulk of the populace lives."

"They're both mountains better than Jared Polis," he said.

Polis is a web-entrepreneur multimillionaire and two-term incumbent who has made a name for himself in Washington for taking strong stances on controversial issues that include immigration, drug policy and gay rights. He is a key fundraiser for Democrats and has been appointed to a number of high-profile positions, including to seats on the influential Judiciary and Rules committees.

Polis and his partner announced the birth of their son last September.

Read this article if you are interested in the topic. A lot of information has been shared based on the actual facts and figures but they can get lab report help to manage their tasks. Their contribution to enhancing general knowledge for us is greatly appreciated. I look forward to hearing more about such interesting topics from you in the future.

I think this is an informative post and it is very useful and knowledgeable. therefore, I would like to thank you for the efforts you have made in writing this article. Vinchin Backup & Recovery

Thanks for sharing the post.. parents are worlds best person in each lives of individual..they need or must succeed to sustain needs of the family.
Satta number
Satta king up
Satta Bajar
Satta Disawar

I think this is an informative post and it is very useful and knowledgeable. therefore, I would like to thank you for the efforts you have made in writing this article. flugsvamp 4.0

Excellent article. Very interesting to read. I really love to read such a nice article. Thanks! keep rocking. twitch streamers

Hey There. I found your blog using msn. This is a very well written article. I’ll be sure to bookmark it and come back to read more of your useful info. Thanks for the post. I’ll definitely return. lucky neko303

wordle 2 is a game in which your task is to decode the crossword to find the key word of that day. It won't be difficult as you will be provided with helpful hints. Enjoy it!

wow, great, I was wondering how to cure acne naturally. and found your site by google, learned a lot, now i’m a bit clear. I’ve bookmark your site and also add rss. keep us updated. scam risk

Nice blog and absolutely outstanding. You can do something much better but i still say this perfect.Keep trying for the best. scam risk

I have read your excellent post. This is a great job. I have enjoyed reading your post first time. I want to say thanks for this post. Thank you... scam risk

I feel very grateful that I read this. It is very helpful and very informative and I really learned a lot from it. scam risk

You completed certain reliable points there. I did a search on the subject and found nearly all persons will agree with your blog. scam risk

I will really appreciate the writer's choice for choosing this excellent article appropriate to my matter.Here is deep description about the article matter which helped me more. scam risk

Very nice blog and articles. I am realy very happy to visit your blog. Now I am found which I actually want. I check your blog everyday and try to learn something from your blog. Thank you and waiting for your new post. scam risk

Well we really like to visit this site, many useful information we can get here. scam risk