“Our Congressman should stand with the people of his district — not the oil and gas companies from Oklahoma and Texas,” said Gannet, owner of Holy Terror Farm. “We farm and make our living here.” 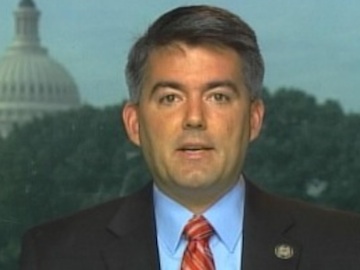 She is one of dozens of farmers in the North Fork Valley concerned about oil and gas drilling encroaching on their lands and fouling the environment. Under pressure from residents and environmental groups, the Bureau of Land Management announced last month that it was deferring all parcels associated with a disputed oil and gas lease sale in the North Fork Valley planned for August.

The bill the House passed, HR 4480, would swing the momentum in the other direction, requiring the Department of Interior to open at least a quarter of federal land where there are oil and gas reserves. The bill, sponsored by U.S. Rep. Cory Gardner, R-Colo., absorbed an exhaustive list of other Republican energy goals, including one that blocks proposed pollution standards for gasoline, another to conduct Internet-based auctions for onshore energy leasing and “a $5,000 documentation fee” for anyone from the public who wishes to formally object to a leasing or drilling decision. Many of the measures came from Colorado Republicans Scott Tipton, Doug Lamborn, Mike Coffman and Gardner.

"You know what will help people move forward? It's making sure they can afford the gasoline they need to put into their tank," Gardner said in his floor speech.

Democrats and others who oppose the bill say it will do nothing to lower gasoline prices.

They see it as an overt land giveaway to the oil and gas industry that finances so many congressional campaigns, including those of the aforementioned Colorado Republicans.

“Our groups support balanced oil and gas development on public lands, but there's nothing balanced about this bill. It tips the scales heavily in favor of oil and gas companies,'' Kate Zimmerman, public lands policy director for the National Wildlife Federation, said in a prepared statement. “It makes it harder for ordinary citizens to weigh in on decisions about their own public lands.”

“Congressman Tipton's got it backwards: he needs to put citizens and the environment before the oil companies and not the other way around,” said Joan May, a county commissioner for San Miguel County, which is part of Tipton's 3rd Congressional District. “All these bills do is put Big Oil in the driver's seat but do nothing to relieve consumers at the pump. They stack the deck for the oil and gas companies while stripping rights from local governments and individual citizens alike.”

Democrats tried attaching amendments to the energy legislation to make it more palatable to them but they were shot down. One, introduced by Rep. Jared Polis, D-Colo., would have put 1,000 feet between hydraulic fracturing operations and public schools. Republicans rejected it.

Polis said he will continue to try to establish a federal setback standard for drilling near schools.

“We need to learn more about the health impacts of fracking but we shouldn't be using schoolchildren as guinea pigs,” he said after the amendment was defeated Wednesday. “This 1,000-foot buffer is a common sense solution we can put in place until we have more answers about the impacts of fracking air pollution on our children's health. We need more oil and gas production but drilling should be conducted in a way that is consistent with public health.”

Oil production is at an eight-year high and oil and gas drilling is at its highest level since the Reagan administration. This year the Interior Department continues to announce new oil and gas leases to go along with the 38.4 million acres of federal public lands leased in fiscal year 2011. Less than a third of the acreage is leased and in production. About 6,500 drilling permits are unused in the West.

A new report released Wednesday found that Colorado's oil and natural gas industry is performing in line with regional and national trends and has recovered a significant share of pre-recession drilling activity despite energy markets that favor states with unconventional oil fields to ones with natural gas.

Still, volatility in the market has led to instability in the oil and gas industry's workforce. During the country's recession, the oil and natural gas industry lost jobs at a faster rate than all industries save construction in Colorado, and today make up less that 1 percent of total employment statewide, according to The Status of Colorado's Oil and Gas Industry by Headwaters Economics.

Meanwhile, surveys continue to show support for conserving public lands. The Small Business Majority last month found that 63 percent of Colorado businesses agree “access to parks, public lands and other outdoor opportunities is a large part of the reason they live and do business in Colorado.”

“Coloradans want a balanced approach, but this legislation creates more speculation on public lands and removes clean air and water protections,” said Checks and Balances Project Co-Director Matt Garrington. “The bill passed today is an extreme solution for a problem that doesn't exist.”

The bill is expected to meet strong resistance in the Democrat-controlled Senate.

Hydro, waterwheels and hydrogen better. Also, does nothing for global warming.