RealAspen News and Community Content Feed
By John Tomasic
The Colorado Independent – June 13, 2012
Set by a lightning strike last week, according to the Larimer County sheriff's office, the High Park Fire burning west of Fort Collins in Colorado has burned more than 46,000 acres and taken one life. It's already one of the worst fires in Colorado history and, fueled by the dry conditions and tinderbox beetle-kill forests that have become the norm here, it is a harbinger of fires to come.

Colorado representatives in Washington are urging the government to take action to up preparedness for the coming years.

They sent a letter to U.S. Forest Service Chief Tom Tidwell on Monday calling for additional resources. They said the fire was being fueled by "perfect storm" conditions. The letter stressed the need for additional air teams to help the nearly 500 fire fighters now working at the blaze on the ground. 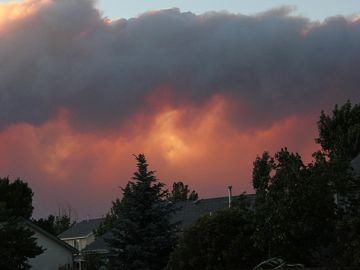 In a release Tuesday, Bennet said he is urging President Obama to sign legislation passed by the House and the Senate last week that would add seven firefighter air-tankers to the Forest Service fleet.

Over Labor Day weekend in 2010, another Colorado foothills blaze, the Fourmile Fire, erupted just miles above Boulder. The location and the speed of the fire, whipped up by high winds and feeding on dry and hot conditions, made it one of the most destructive fires in state history. Nearly 170 homes burned. Insurance claims hit nearly $220 million.

Washington, DC – Colorado U.S. Senator Michael Bennet released the following statement on the High Park Fire in Larimer County. The fire, which continues to grow, has taken one life and burned more than 41,000 acres.

“As crews work tirelessly to contain the fire, our main concern is the safety of Larimer County residents. Those close to the fire should take all warnings and evacuation orders very seriously and move to safety as directed,” Bennet said. “The firefighters and first responders who have been attending to evacuees and victims must have the necessary resources to do their jobs safely and effectively. My staff and I remain in contact with local, state and federal offices and are working to meet these needs.

“At the same time, we must work to ensure preparedness for future fires. Both Congressional action to reauthorize Stewardship Contracting Projects in the Farm Bill and the President's signature to allow the purchase of new large air tankers would go a long way in supporting efforts to prevent and respond to future fires.”

Up-to-date information on the status of the fire can be found on the Larimer County Sheriff's website, which is accessible on Bennet's website, along with additional resources and wildfire information.

Monday, Bennet joined members of the Colorado Congressional delegation on a letter to Tom Tidwell, chief of the U.S. Forest Service, urging him to expedite resources to the region to help firefighters respond quickly and effectively.

In a letter last week to the House Agriculture Committee, Bennet urged committee leadership to reauthorize Stewardship Contracting Projects as part of a robust forestry title in the House version of the 2012 Farm Bill. Stewardship Contracting Projects allow the federal government to contract with businesses to remove forest products from federal land to reduce the risk of forest fires, improve forest health and strengthen wildlife habitat. Bennet is also urging President Barack Obama to sign a bill that allows the U.S. Forest Service to purchase up to seven more large air tankers, which have been helpful in fighting wildfires across the country. Both the Senate and the House of Representatives passed the bill last week.