RealAspen News and Community Content Feed
By Troy Hooper
The Colorado Independent – June 7, 2012
Editor's note: This is the third installment in an ongoing series on hydraulic fracturing near schools. Read the first part here and the second part here.

LONGMONT — As she kept a watchful eye on her playful toddler, Lindsay Gahn pulled out a state-issued map of town where subdivisions susceptible to oil and gas drilling were colored in red.

“When I saw this, my heart just stopped,” she said, pointing to the ubiquitous red blobs on the map.

Under Colorado law, there could be drilling next to half of the schools in Longmont. In Adams, Boulder, Broomfield and Weld counties, 32 public schools are within 2,000 feet of a drilling site, and 26 of those schools are within 1,000 feet, according to a recent Western Resource Advocates analysis. 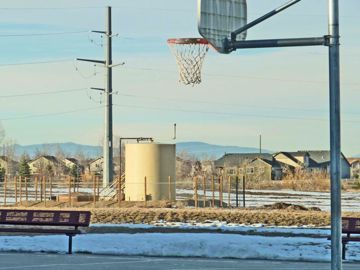 This gas well, which is 360 feet north of Trail Ridge Middle School in Longmont, led to the contamination of area ground water. (Photo via LongmontROAR.org)

“Colorado law only mandates a 350-foot setback from schools and residential areas for oil and gas wells, a much shorter distance than required for businesses such as medical marijuana dispensaries or liquor stores,” the Boulder nonprofit's analysis said. “In fact, it is illegal in Colorado to idle a vehicle for more than 5 minutes within 1,000 feet of a school — but you can drill for oil and gas, spewing potentially toxic chemicals into the air, as long as you aren't closer than 350 feet.”

Residents in Longmont, which lies in Boulder County, and other communities across the state are wrestling with protecting themselves from the impacts of the nation's booming oil and gas industry. Ever since hydraulic fracturing, aka “fracking,” and horizontal drilling made once-hard-to-reach deposits of oil and gas both accessible and profitable in 2007, oil derricks and natural gas well pads have been creeping closer to more homes, schools and regions where drilling never occurred before.

“There is a proposal to drill a well immediately next to a middle and elementary school on the eastern side of town,” said Food & Water Watch regional director Sam Schabacker. “This is a very real deep concern for the citizens of Longmont in that there could be drill rigs next to half of their schools.”

Longmont City Council attempted to pass its own regulations that would have prohibited drilling in residential areas but it backed off last month after Colorado Attorney General John Suthers sent a letter to the city with an implied threat of a lawsuit should the council proceed with its regulations.

“Longmont is Exhibit A for how the state of Colorado has failed its citizens,” Shabacker said.

Gov. John Hickenlooper and industry groups say the state should regulate oil and gas drilling. Colorado has the strongest hydraulic fracturing, or fracking, disclosure laws in the nation, they insist, but astute residents lament that state officials aren't enforcing their own rules.

“If the Colorado Oil and Gas Conservation Commission gets its way, it won't be long before Longmont will look like Erie,” said one local teacher who asked not to be identified. Drilling near schools is becoming commonplace in Erie, where residents are trying to shut down a new Encana project.

There is currently a drilling ban in Longmont but it expires June 16.

Worried about their future, residents are fighting back.

Last week, an issue committee titled Our Health, Our Future, Our Longmont filed a notice of intent with the city clerk to put a charter amendment on the November ballot to ban fracking in the city limits, period. If it were to get passed, Longmont would become the first city in Colorado to ban fracking.

“The state and the Colorado Oil and Gas Association are bullying Longmont to take away their local control and the city council is not standing strong to protect the health, safety and welfare of Longmont residents, so this petition is our only recourse,” Peter Champe with Our Health, Our Future, Our Longmont said in a release that noted 6,000 valid signatures are needed. “People who live, work and raise their families in Longmont should have a say on whether or not they want their air, water, soil and roadways threatened by the risky process of fracking and the subsequent well production. If no action is taken, existing regulations would allow hundreds of wells to be drilled in Longmont.”

COGA officials have not returned messages seeking comment for this series.

A rallying point for residents here has been Lakewood-based TOP Operating's Rider 1 gas well positioned 360 feet north of Trail Ridge Middle School. For at least three years, the ground water around the well was contaminated with carcinogens such as benzene, which was measured at almost 100 times the state limit, according to the Colorado Oil and Gas Conservation Commission.

Debates about where to drill and how far back operations should be from homes and schools have flooded the state capitol but legislation that would have better protected the public was shot down.

That's discouraging to many of the parents and teachers in Longmont.

“This isn't a political issue,” Gahn said. “I'm worried about the health and safety of my kids.”