Editor's note: This is the first in a multi-part series on Colorado's natural gas and oil industry that continues later this week.

ERIE — Flaggers in bright yellow vests stopped traffic on the parkway here last week as a convoy of semi-trailer trucks rumbled toward Red Hawk Elementary hauling sound barriers to muffle a gas extraction project that is vexing many residents in this once peaceful family neighborhood.

Encana is preparing to drill the Canyon Creek well site, where a prairie rife with birds and a wetland alive with waterfowl separate it from hundreds of houses in the Creekside neighborhood. Red Hawk Elementary, which is now on summer break, is a few hundreds yards south of the drilling site. 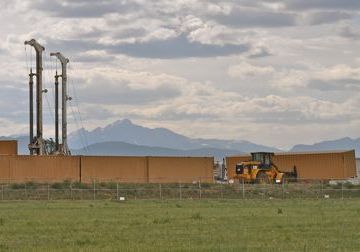 Trailers are used as sound barriers at a new drilling operation near schools and homes in Erie. Longs Peak looms in the background. (Photo by Troy Hooper)

Despite its close proximity to homes and Red Hawk and Erie elementary schools, the gas project falls within the state's regulations that dictate a 150-foot setback in rural areas and 350 feet in developed areas. Neighbors say the noise from the project is waking them up at night, as Encana is working around the clock to try to complete its hydraulic fracturing job before students return in August.

“There is noise twenty-four [hours], seven [days a week]. It's waking people up at night and this is only the beginning. The drilling hasn't even started yet and the truck traffic is ridiculous already,” said Jennifer Palazzolo, whose daughter is a second-grader at Red Hawk Elementary.

“This is an activity that is not appropriate near schools or homes,” Palazzolo said.

She is a among a group of mothers and children who recently marched into Encana's headquarters in Denver with a petition signed by 21,000 people demanding the company pull the plug on the project.

Industry representatives dismissed the petition, saying many of the signatures came from people who lived outside of Erie. Drilling preparations at the Canyon Creek well site began late last month.

A large rally — spearheaded by community activists who call themselves Erie Rising — was planned for Saturday to try to draw more attention to the drilling noise and pollution that burden affected citizens.

The natural resource extraction business is booming in Colorado and across the country as the nation continues to ween itself from foreign oil and desperately searches for ways to create more jobs. But the laws governing where and how oil, gas and minerals are extracted from the earth are still taking shaping, as cities and counties seek to make their own land-use decisions. Gov. John Hickenlooper and industry representatives remain adamant that state law trumps local laws. A task force the governor convened recommended the creation of community liaisons to bring local concerns to the state.

Many residents have criticized the governor, a Democrat, for his zealous support of the industry.

The Colorado Oil and Gas Conservation Commission (COGCC) and industry group Colorado Oil and Gas Association contend Colorado's drilling rules are the toughest in the country. They cite COGCC's ruling last year that companies must disclose more of the chemicals used in fracking, in which water, sand and chemicals are flushed into the ground to release oil and gas.

Making laws is one thing. How they are enforced is another. Of the 516 oil and gas spills in 2011, COGCC only assessed five fines, according to an analysis Earthworks released in March.

“A lot of people like to say Colorado has the strongest oil and gas rules but there's always room to do better,” said Mike Chiropolos with Boulder-based Western Resource Advocates. “The Niobrara Formation is a game changer. Fracking for oil and gas development went from being a marginalized issue to the mainstream. It's incumbent on the governor and the state to listen to citizens and take their concerns seriously instead of writing them and warning that they could be sued.”

He suggested the industry take advantage of advanced technologies that allow horizontal drilling to occur 2,000 feet away to lessen the disturbance on schools and neighborhoods.

“I don't see how Colorado can continue with its current setbacks,” Chiropolos said. “They are absolutely unacceptable in 2012.”

Erie lies in the gas-rich Denver-Julesburg Basin northeast of Denver.

There are hundreds of active and abandoned wells in the area, many of them testing the limits of the state's setback boundaries. A well pad that Encana has already drilled and continues to produce is only about 100 yards from nearby Aspen Ridge Charter School. Erie High School is also surrounded by drill pads.

There are other well pads in the area that are within a stone's throw of several neighborhoods.

In March, after a National Oceanic and Atmospheric Administration report showed levels of propane — a chemical used in fracking — 10 times higher in Erie than in other cities, town leaders imposed a 180-day moratorium on new well permits.

The Canyon Creek well site was permitted before the moratorium took effect.

Wendy Leonard, who rents a home in the neighborhood, told 9News and the Daily Camera that she is concerned about the project's emissions and the potential for groundwater contamination.

Some fracking chemicals have been identified as carcinogenic.

"Thirty thousand gallons of chemicals will be transported through an area where our kids are walking and bicycling," Leonard told the Daily Camera. "There is not enough evidence that shows this is safe."

Fearing for their health, Leonard's family is moving out of the neighborhood.

The Environmental Protection Agency linked hydraulic fracturing to groundwater contamination in Wyoming last year and it is in the midst of a two-year study on its potential health impacts.

The Associated Press recently reported that Wyoming Gov. Matt Mead persuaded EPA Director Lisa Jackson to postpone the Dec. 8 announcement, giving state officials – whom the EPA had privately briefed on the study – time to try to debunk the finding. Scientists have also determined the disposal of fracking wastewater through deep-well injection can trigger minor earthquakes every now and then.

A University of Colorado-Denver School of Public Health study this year showed that people living within a half-mile of oil-and-gas fracking operations were exposed to air pollutants — such as trimethylbenzenes, aliaphatic hydrocarbons, and xylenes — five times above U.S. hazard standards.

Some residents in Erie suspect emissions from active wells are already causing health problems such as asthma, headaches and gastrointestinal distress. Industry representatives refute the claims.

But the ruckus has caught the attention of U.S. Reps. Diana DeGette and Jared Polis, D-Colo., who have long fought for improved regulation and transparency for the oil and gas production business.

Polis recently issued a statement citing his concern for Erie residents. Drilling, he said, shouldn't “force people out of their homes or occur on top of school grounds where children play.”

Messages left with Encana and other industry representatives were not returned.

The impacts of the Canyon Creek well site can be felt a mile away where traffic control crews periodically shut down the Erie Parkway as convoys of semi-trucks pull out of the neighborhood to retrieve another load. And for now that's just the way life is for residents and visitors to Creekside.