RealAspen News and Community Content Feed
By Troy Hooper
The Colorado Independent – May 23, 2012
The fight over America's energy policy has a new battleground: the Department of Defense budget.

House Republicans passed a pair of provisions last week that would stymie the military's efforts to incorporate more renewable fuels into its supplies. The defense authorization bill now heads for a markup in the Senate Armed Services Committee, where Democrats are preparing to go to battle. 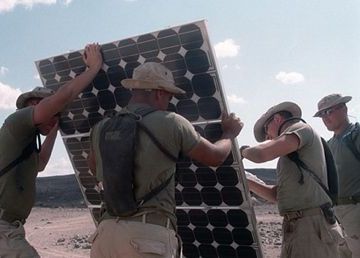 “In addition, the fiscal costs related to DOD's dependence on fossil fuels are staggering. The annual Pentagon fuel bill increases by $130 million for every dollar increase in the cost per barrel of oil,” the letter continued. “This year alone, the Department of Defense will face an additional $1.3 billion bill as a result of the recent rise in fuel prices. Given that our military consumes approximately 300,000 barrels of oil per day, research into alternative fuels is a strategic and economic necessity.”

In response, Admiral Greenert wrote back (pdf) this week, saying attempts to obstruct the military's transition to alternative fuels “will impede America's energy security.” He referenced a May 16 statement from his superiors that lamented the House provisions would affect the Department of Defense's "ability to procure alternative fuels and would further increase American reliance on fossil fuels, thereby contributing to geopolitical instability and endangering” U.S. interests abroad.

“The Navy's energy program is focused on enhancing our combat capability and readiness through increased energy efficiency and improving energy security,” the admiral wrote. “Energy security requires assured access to a reliable, secure, and affordable supply of energy for Navy missions today and in the future. To this end, the Navy has been researching alternative liquid fuels for operational use since 2003 in 'full transparency with Congress. While the Navy does not intend to purchase alternative liquid fuels for operational use until they are price competitive with petroleum.-based fuels, the Navy needs flexibility to continue the testing and certification of all potential alternative fuel pathways to ensure the Navy has an ‘off-ramp' from conventional fuel sources.”

The military is emerging as a leader in the country's clean energy movement, setting a goal of producing three gigawatts of renewable energy by 2025, or enough energy to power 750,000 homes. Each branch of the military is expected to kick in a gigawatt of energy, with the Navy taking the lead.

Not only are fossil fuels expensive, but transporting liquid fuel is an additional burden on the troops. And too often a deadly one. Many of America's troops in Iraq and Afghanistan have been killed guarding fuel convoys and defending fuel resupply lines. According to Sierra Magazine: One out of every 24 fuel convoys in Afghanistan, and one out of 38 in Iraq, led to the death of a soldier in 2007. In 2007 alone, that adds up to hundreds dead given the 6,000 recorded fuel convoys. Between 2003 and 2010 more than 3,000 troops have been killed or wounded while moving fuel.

The defense authorization bill passed the House by a vote of 299 to 120. Colorado Republicans Scott Tipton, Mike Coffman, Doug Lamborn and Cory Gardner all voted for it as did Democrat Ed Perlmutter. Colorado Democrats Diana DeGette and Jared Polis voted against the defense bill.

Rep. Coffman, a veteran who sits on the House Armed Services Committee, has criticized the Obama administration's emphasis on weening the military off fossil fuels and investing in alternative energy.

"By forcing our military to adopt high-cost renewable energies, while at the same time pushing for reductions in military personnel, the president will ultimately force further reductions to achieve his costly Green Energy initiative while also meeting his demands for a smaller military,” Coffman said earlier this year.

The stage is now set for a showdown over the military's energy spending between Sens. Udall, Shaheen and Begich and Sens. John McCain, R-Ariz., and James Inhofe, R-Okla., who have decried the military's shift away from fossil fuels. The arguments just may come down to dollars and cents.

“There is a clear need to find cost-competitive alternative fuels, given the fiscal challenges the Navy is facing in FY12 alone due to increases in the price of fuel,” Admiral Greenert wrote to the senators.