8th-graders agree with Vail-area Rep. Polis: Pizza is not a vegetable

RealAspen News and Community Content Feed
By Troy Hooper
The Colorado Independent – May 16, 2012
LOUISVILLE — In a bustling lunchroom here Monday, when students were asked to raise their hand if they believed pizza was a vegetable, no one did. Yet when the U.S. House and Senate were essentially asked that same question last fall, their answers weren't as smart as the eighth-graders'.

And we're not talking about a veggie lover's slice either. Under existing federal child nutrition law, even a couple of tablespoons of tomato paste on a pizza is enough to qualify it as a vegetable. Never mind that scientists classify tomatoes as fruits, even if cooks consider them vegetables.

“Congress said that eating pizza is the same as eating green beans or peas or broccoli,” U.S. Rep. Jared Polis, D-Colo., told the students. “While most of us know that sounds crazy, Congress apparently doesn't.” Polis represents the Vail Valley in Colorado's 2nd Congressional District. 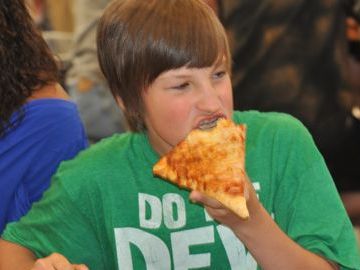 Just after the teens finished eating — what else? — cheese pizza, a vegetable salad, grapefruit slices and whole strawberries, Polis used the Louisville Middle School lunchroom as the backdrop for the introduction of a new bill, the School Lunch Improvements for Children's Education (SLICE) Act.

The legislation would close the loophole that allows a pizza without vegetables to be counted as a serving of vegetables in federally subsidized lunches eaten by almost 32 million U.S. school children.

Two years ago, Congress passed a child nutrition law that called on schools to improve the nutritional quality of lunches they serve but then lobbyists for frozen pizza sellers like ConAgra Foods Inc. and Schwan Food Co. started hanging around the Capitol and the next thing you know pizza was classified as a vegetable. Lobbyists for french fry makers like the one that supplies McDonald's Corp. also succeeded in preventing limits on how many starchy vegetables, like potatoes, are served.

There is an epidemic of childhood obesity across the nation and around the world. Experts estimate one in five children between the ages of 6 and 17 are overweight in the United States.

“We all eat pizza. I eat pizza. I enjoy pizza,” Polis said, calling a slice of pie “a good snack from time to time” that “can be part of a healthy diet” so long as all of its carbohydrates, calories and saturated fat are balanced out by exercise and overall healthy eating. While “pizza can be a lot of things to a lot of people,” he stressed that one thing it certainly is not is a vegetable.

In addition to setting higher standards for when tomato paste and puree counts as a vegetable, the SLICE Act (pdf) seeks to implement sodium-reduction targets and a whole grain requirement.

The U.S. Department of Agriculture spends $18 billion a year on its student lunch program.

0 Comments on "8th-graders agree with Vail-area Rep. Polis: Pizza is not a vegetable"