Obama has made domestic energy production a priority of his administration. He has repeatedly called for an all-of-the-above strategy that capitalizes on above-ground resources like wind and solar as well as those beneath the ground like oil and gas. Oil production is at an eight-year high and oil and gas drilling is at its highest level since President Reagan was in office. Just yesterday, Interior Secretary Ken Salazar approved plans to develop 3,675 natural gas wells in Utah. 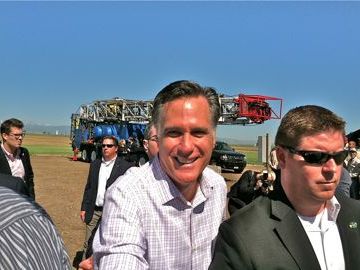 Mitt Romney shakes hands with supporters after his speech Wednesday morning at a drilling site in Ft. Lupton, Colorado. (Photo by Troy Hooper)

But Romney credits loosened regulations under President Bush for the surge in U.S. energy production.

The former Massachusetts governor held his first Colorado campaign event since February at a K.P. Kauffman Co. oil field, which records show failed its last state inspection in July 2011. The woman who answered the phone at K.P. Kauffman's field office in Ft. Lupton said she was unaware of any of the company's multiple oil spills or what's been done to remedy them.

Romney sided with Colorado's industry groups, saying he believes hydraulic fracturing, aka fracking, should be regulated at the state level instead of the federal level, as the Obama administration recently proposed. The boom in drilling in the United States has raised concerns about its impacts on public health and the environment. Local, state and federal officials are scrambling to react. But industry groups and Gov. John Hickenlooper are pressuring local and federal officials to butt out.

Even though Colorado has one of the nation's strongest regulations for fracking, the state's Oil and Gas Conservation Commission only assessed five fines for the 516 spills last year. Watchdog groups say it is no wonder the industry and pro-oil politicians favor state oversight.

As he arrived in Colorado, Romney was taking a beating on the morning talk shows for again trying to take credit for saving the U.S. automobile industry. He was even taking it on the chin from fellow conservatives like Joe Scarborough who said he couldn't take Romney seriously considering the candidate infamously wrote a New York Times Op-Ed titled: “Let Detroit Go Bankrupt.”

“If this guy was any oilier, he'd be lobbying to drill himself,” comedian Bill Maher tweeted.

Romney's comment raises questions about his “character and makes it clear that he is a politician that will say or do anything just to get elected,” Colorado Democratic Party Chair Rick Palacio said.

The crowd at Ft. Lupton was much nicer. More than 400 supporters showed up to listen to Romney, many of them staying afterwards for a chance to shake his hand, get autographs and shoot photos.

Obama's policies “are rooted in perspectives of the past," Romney told them. "His ideas about energy are simply out of date. His other policies flow from the thinking of liberals from years ago. Their view was, if there was a problem in the economy, the government ought to take it over and run it."

Small groups of demonstrators lined the rural road where Romney's motorcade arrived and departed. They waved signs that read: “Romney, In The Tank For Oil,” “No Fracking, Not Here, Not Now, Not Ever,” “Natural Gas - Bridge Fuel to Nowhere” and “Tell Romney, End Subsidies to Big Oil.”

Many of them tried to gain access to Romney's speech but were denied by a phalanx of law enforcement and Secret Service agents who said it was a private event closed to the public. That message countered what Weld County Sheriff John Cooke told The Colorado Independent. The sheriff said that the event was originally supposed to be private but that at 4:30 p.m. Tuesday he received notice from the Romney campaign that they were inviting members of the public to attend. The Secret Service agent in charge said that she was told that members of the public had to be invited by the Romney staff.