Beaver Creek Republican filmmaker and would-be politician Ali Hasan made waves with Colorado conservatives last month with a Huffington Post column on the backlash against a proposed mosque near Ground Zero in New York City.

“If you are against the mosque, then call yourself a bigot and give us the gift of an honest dialogue, the kind we carry on so proudly here in America,” Hasan wrote, calling out fellow conservatives. Yes, you will be a bigot -- but at least you will be a man.”

Today, on the ninth anniversary of 9/11, media critic and blogger Jason Salzman used Hasan's comments as a jumping-off point for a blog targeting Colorado's Tea Party and 9-12 movements, which have supported candidates such as Weld County District Attorney Ken Buck for U.S. Senate and Evergreen businessman Dan Maes for governor.

“The 9-11 tragedy had nothing to do with religion, and everything to do with criminal mass murderers,” Salzman writes on the Colorado Independent website. “But today, on the anniversary of 9-11, you wonder how many of us understand that, as anti-Islamic hatred connected to 9-11 appears to be growing and polls show outright bigotry toward Muslims rising.” 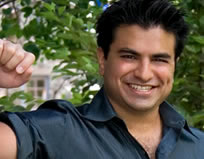 Hasan, who has unsuccessfully run for state treasurer and the state House of Representatives district that includes Vail, has never shied away from controversial topics, including bucking his party's traditional stances on gay rights.

In October of 2008, Hasan criticized then candidate Barack Obama for trying to distance himself from Islam even as Republicans were accused of trying to cloud the issue of Obama's religion. Hasan was reacting to former Secretary of State Colin Powell blasting the GOP for the tactic on “Meet the Press.”

“I'm also troubled by, not what Sen. (John) McCain says, but what members of the party say and it is permitted to be said, such things as, ‘Well, you know that Mr. Obama is a Muslim.' Well, the correct answer is, he is not a Muslim, he's a Christian,” Powell told host Tom Brokaw.

“But the really right answer is what if he is? Is there something wrong with being a Muslim in this country? The answer's no, that's not America. Is there something wrong with some seven-year-old Muslim-American kid believing that he or she could be president? Yet, I have heard senior members of my own party drop the suggestion, ‘He's a Muslim and he might be associated terrorists.' This is not the way we should be doing it in America.”

Hasan provided this comment to Real Vail at the time:

“I was deeply touched by Powell's words and I agree with them,” Hasan said. “However, I have been disappointed with Obama's lack of outreach to the Muslim community. Obama, in my mind, has gone at great lengths to distance himself from the Islamic religion, rather than to actually discuss his special role in being someone that could unite divisions between America and the Muslim world.”

Salzman, in his post on the Colorado Independent site, also interviews Phil Wolf, the owner of a Front Range car dealership who garnered a great deal of publicity for putting up a billboard with a depiction of Obama in a turban and the words, “President or Jihad?”

Wolf told Salzman he intends to put up new billboards in the coming months, and he had this to say about whether Islam is the enemy:

“That's what's out there,” Wolf told Salzman. “That's the public perception. As far as the public knowledge is concerned, they are. And if they are, there should be zero tolerance. We should go back to what happened during World War II. Look what happened to the Japanese. And guess what? There's a lot of wonderful Muslim and Japanese people. But we didn't tolerate the enemy. We just don't call anybody the enemy anymore.”

The central Rocky Mountains of Colorado played a controversial historical role in World War II – not only training alpine ski troopers to fight Nazis in Italy at Camp Hale near Leadville, but also interring American citizens of Japanese ancestry at prison camps in places like Grand County near Winter Park.