RealAspen News and Community Content Feed
By Troy Hooper
Real Aspen – April 13, 2012
The once-lush delta where the Colorado River used to spill out into the Sea of Cortez is now a dry sandy landscape in Mexico where “America's hardest-working river” is too tired to finish the job.

Climate change, urban demand and a burgeoning energy industry are tapping the Colorado River to death. The 1,450-mile waterway hasn't reached its historic destination since the 1990s.

In recent months, the United States and Mexico have been in negotiations over a new allocation agreement that could help spring some life back into the Colorado River Delta. A coalition of conservation groups in the Southwest delivered more than 5,000 signatures this week to the U.S. Department of State urging officials to work with Mexico to restore water flow to the river delta.

“We need to focus on collaboration and compromise,” said Gary Wockner of Save the Colorado when he announced the conservation groups' petition on Sunday. “The U.S. and Mexico have a historic opportunity to meet their own water needs while allotting a small flow back to the river.” 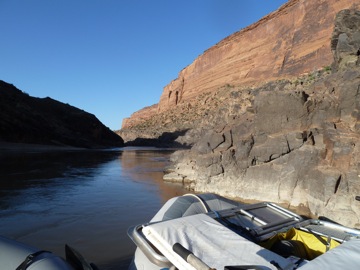 The Colorado River's headwaters are in the state of its namesake where it collects much of its water west of the Continental Divide. To feed Denver and other cities and farmlands along the Front Range, where most of the state's population lives, the water has to be pumped east over and through the Rocky Mountains. The river naturally flows in the other direction, through seven states and Mexico, supplying water for Phoenix, Tucson, Las Vegas, Los Angeles, San Diego and Baja, California.

U.S. Interior Secretary Ken Salazar, a former Colorado senator, spoke about the pressures on the Colorado River during the State of the Rockies Project conference this week at Colorado College where the degradation of the Colorado River Basin has been the central theme for students this year.

In his speech, Salazar said the Colorado River Compact, signed in 1922, overestimated its water supply by 2 million acre feet, and he blasted Rep. Doug Lamborn, R-Colorado, for trying to open large swaths of the American West to oil shale — a commercially unproven water-intensive resource.

Humans already drain over 5 trillion gallons of water a year from the Colorado River and a recent study shows that if climate change continues at its current rate, there soon won't be enough water in the river to satisfy the 30 million people or so who depend on it. Additionally, planned diversions to quench the thirst of the urban masses are on the rise — many of them, like the proposed Flaming Gorge mega pipeline from a tributary in Wyoming to Colorado's Front Range, are steeped in controversy. Add in the rush of oil and gas companies that require vast quantities of water to flush down the holes they drill in the ground and the Colorado River ranks as one of the nation's most endangered rivers.

The Colorado River Delta used to be a 2-million acre wetland with one of the continent's most vibrant migratory bird populations. Like a mirage in the desert, that has all disappeared. Low flows in the United States are now a threat to endangered fish, riparian ecosystems, native plants and animals.

There isn't a specific water quantity on the main stem of the Colorado River designated for environmental needs, stressed a Colorado College State of the Rockies Report Card released this week. The student report is full of supporting data and first-person accounts, including those of two recent Colorado College graduates and field researchers, Will Stauffer-Norris and Zak Podmore, who completed a 110-day-long expedition of the entire Colorado River that was mostly spent kayaking, except for sections that were too depleted for their boats to navigate.

• Recognize the finite limits of the river's supplies and pursue a “crash course” in conservation and water re-distribution that sustains current users while leaving water in the river.
• Modify and amend the “Law of the River” to build in cooperation and flexibility.
• Embrace and enshrine basin-wide “systems thinking” in the region's management of water, land, flora and fauna, agriculture, and human settlements.
• Give “nature” a firm standing in law, administration, and use of water in the basin.
• Adopt a flexible and adaptive management approach on a decades-long basis to deal with past, present, and projected future variability of climate and hydrology.

What’s the point of writing this post if it’s being spammed the shit out of it . Good job anyways. UK News

"After most of the Colorado River basin became part of the U.S. in 1846, much of the river's course was still the subject of myths and speculation."

Whatever 'myths' there are about the river, it is an amazing place of history and beauty. Thanks for highlighting this river Business Social Media

It’s hard to find knowledgeable people on this topic however you sound like you know what you’re talking about! Thanks 카지노사이트

Oh my goodness! a wonderful post dude. Many thanks Even so I am experiencing problem with ur rss . Do not know why Can not enroll in it. Will there be everyone getting identical rss difficulty? Anyone who knows kindly respond. Thnkx download gram

Great write-up, I am a big believer in leaving comments on sites to help the blog writers know that theyâ€™ve added some thing advantageous to the world wide web! Sports News

When it comes to great sites, I love the usability of this one! Thanks so much from Vale Clearances

The Colorado River originates in Utah from snowmelt from the Rocky Mountains, then flows through Arizona, Nevada and California to Mexico. The river supplies water to 17 million people, most of whom live in Arizona, California and Nevada and you can check more ideas here to design your healthy nails. In recent years, there has been a push to build more dams on the Colorado River -- but not everyone agrees with this idea. Environmental groups are concerned that dams will cause irreparable damage to fish habitat and threaten other species downstream.

I’m excited to uncover this page. I need to to thank you for ones time for this particularly fantastic read!! I definitely really liked every part of it and i also have you saved to fav to look at new information in your site. financial freedom

I truly like you're composing style, incredible data, thankyou for posting. financial freedom

I would recommend my profile is important to me, I invite you to discuss this topic... financial freedom

Very interesting blog. Alot of blogs I see these days don't really provide anything that I'm interested in, but I'm most definately interested in this one. Just thought that I would post and let you know. financial freedom

I am hoping the same best effort from you in the future as well. In fact your creative writing skills has inspired me. financial freedom

It is imperative that we read blog post very carefully. I am already done it and find that this post is really amazing. financial freedom

That is very helpful for increasing my knowledge in this field. financial freedom

this is really nice to read..informative post is very good to read..thanks a lot! financial freedom

Nice post! This is a very nice blog that I will definitively come back to more times this year! Thanks for informative post. financial freedom