Ski racing fans can meet, ski with U.S. team at The Championships in Winter Park

The resort is hosting the U.S. Alpine Championships combined with the NASTAR National Championships March 22 to April 1, with pro/am races that will allow recreational weekend warriors the chance to team up with American athletes who have been on the World Cup circuit all season, winning races in record numbers. 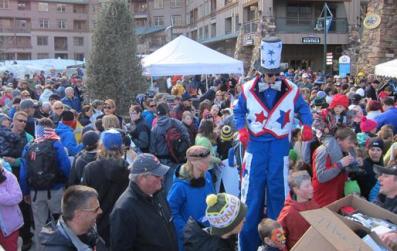 With the exception of men's and women's World Cup action in Beaver Creek and Aspen in late November and early December, the White Circus is mostly contested in Europe. U.S. Nationals, especially combined with hands-on participatory races, represent a rare opportunity to see Olympic champions like recently crowned overall winner Vonn and Ted Ligety up close and in person.

Here are all of the details as provided in a release from the U.S. Ski and Snowboard Association:

The Championships are designed to rally American alpine racers and the industry around one event. Recreational racers and fans of the sport will have the opportunity to meet, race and compete with current and former U.S. Ski Team athletes, including Ted Ligety, Mikaela Shiffrin, Stacey Cook, Picabo Street, Heidi Voelker, Doug Lewis, AJ Kitt and more. The 10 day festival is a celebration of ski racing for all levels, recreational and elite.

The Nature Valley NASTAR National Championships return to Winter Park Resort bringing nearly 1,200 recreational racers together in a culmination of the largest recreational ski and snowboard race program in the world. Events will include Men's & Women's Giant Slalom. The weekend also brings après ski musical sets by celebrated New Oleans Funk & Bayonu Soul artists, The Soul Rebels Brass Band and Marc Broussard, and a screening of the latest Warren Miller film . . . Like There's No Tomorrow. For details visit http://www.nastar.com/. And for live updates, photos and videos "LIKE" the NASTAR Facebook page.

The Return of the Champions Family Challenge and U.S. Ski Team Reunion is a team race where family members can compete as a team against other family teams. In addition, the event is designed as a U.S. Ski Team reunion so that alumni can bring their kids and parents to the event and compete with their families. Teams must have a minimum of three family members and each team member will score points for their team within their age and gender group. Anyone is welcome to participate, Family Teams do not need to qualify for the race but pre-register is required as space is limited. Click here or visit www.WinterParkResort.com event's tab for more information.

The U.S. Ski Team Pro-Am is a team event where race league teams and teams of friends from across the country can compete for a National Championship team title. To add to the excitement, each team will add a U.S. Ski Team athlete to their roster. Team captains will select their U.S. Ski Team athlete the night before the race at a welcome reception. Each team member will score points for their team based on the best handicap they earn in their age group. Each team must have a minimum of six team members. Click Here or visit www.WinterParkResort.com event's tab for more information.

The Nature Valley U.S. Alpine Championships serve as the culmination of a five-month season that crossed continents and countries so America's best alpine skiers could go head-to-head with the world. Top athletes from over 400 U.S. Ski Team club programs throughout the U.S. and the U.S. Ski Team will converge on Winter Park for the five-day event. Among those expected to compete are four-time World Cup overall champion Lindsey Vonn (Vail, CO), three-time World Cup giant slalom champion Ted Ligety (Park City, UT) and three-time Olympic medalist Julia Mancuso (Squaw Valley, CA) – all of whom are Olympic gold medalists. For live updates, photos and videos follow and "LIKE" the U.S. Ski Team Facebook fan page.

For complete information go to www.winterparkresort.com.

3 Comments on "Ski racing fans can meet, ski with U.S. team at The Championships in Winter Park"

I missed to see all champs!
whats upcoming even of ski team from june to date?
izod apparel

I think I missed seeing all the champs!

what's up and coming even of ski group. Thanks for sharing this one. Harriton Youth Full Zip Fleece