Vonn picked up 60 points on her nearest pursuer for the overall title, Tina Maze of Slovenia. In the quest for her American record fourth overall title, Vonn now leads Maze 1,502 points to 1,024.

Vonn came from behind on the ramp built in the 1980 Luznhiki Olympic Complex to beat Germany's Maria Hoefl-Riesch, who won the overall title last season and now trails Vonn by 496 points with the season winding down.

"After my first run against Maria, I didn't think that I'd make the podium -- I was three tenths behind and I made it back," Vonn said. "I think my last run was the best run of the day and that's what put me on the podium." 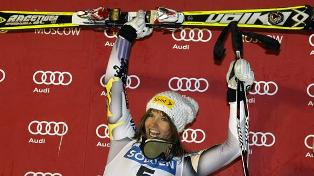 For Squaw Valley's Mancuso, tonight was her second World Cup victory this season and the seventh of her career.

"Events like this are really exciting, anything can happen," Mancuso said. "You're bummed out if you lose, and when you win, it's a big surprise. I knew that if you can have a good start, you can make up any amount of time, so I really focused on my start."

The bracket-style competition was held on a 170-foot-tall, 535-foot-long man-made ramp. Each match featured two runs, with the fastest racer from the first run earning a time advantage for the second run.

Mancuso knocked out Vonn in the semifinal and Austrian Mikaela Kirchgasser in the final to win.

"Kirchi [Mikaela Kirchgasser] is a great slalom skier, and she was really skiing fast in her heats, so I just had to plow down those gates," said Mancuso, a three-time Olympic medalist. Kirchgasser finished second.

Vonn was down .30 to Hoefl-Riesch after the first run of the small final, but won the second run and knocked her friend and rival off the podium.

"I'm excited to be on the podium today, but I'm also really happy for Jules for winning," Vonn said. "She skied amazing. These parallel events are really tough. You can't think about it, you just have to go for it."

The event was presented by Soelden, Austria, the official European training base of the U.S. Ski Team. It capped a successful showcase of alpine skiing in Russia, host country for the 2014 Olympic Winter Games.

"I think it's really cool for everyone who lives in cities to see events like this and to have exposure to ski racing," Mancuso said. "It's also cool to have big ski resorts like Soelden sponsoring things like this to show that the ski world is incredible.

"I hope we have more city events. This helps bring the skiing to the people and helps inspire them to go out and take that ski vacation that they've been dreaming to do."

On the heels of her third-place finish in a downhill at Rosa Khutor near Sochi last weekend, Vonn said she's coming away with an overall favorable impression of the host country for the 2014 Games.

"I wasn't really sure what it was going to be like in Russia, and I was pleasantly surprised," Vonn said. "These races were a lot of fun and I can see now how excited this country is about ski racing, and I think that's only going to increase as we get closer to the Olympics in 2014."

Frenchman Alexis Pinterault won the men's event tonight in Moscow as Ted Ligety, of Park City, Utah, was knocked out in the first round.

The women's World Cup moves to Bansko, Bulgaria, while the men race in Crans Montana, Switzerland.

I was very pleased to find this site.I wanted to thank you for this great read!! I definitely enjoying every little bit of it and I have you bookmarked to check out new stuff you post. Polyester zwembaden

I have read your article, it is very informative and helpful for me.I admire the valuable information you offer in your articles. Thanks for posting it.. Zwembad plaatsen

Thanks for the informative and helpful post, obviously in your blog everything is good.. Goedkoop zwembad

Well, this got me thinking what other workouts are good for those of us who find ourselves on the road or have limited equipment options. Erotische massages

Cool you write, the information is very good and interesting, I'll give you a link to my site. Erotische massage

Thanks for the informative and helpful post, obviously in your blog everything is good.. Erotische massages Limburg

I was very pleased to find this site.I wanted to thank you for this great read!! I definitely enjoying every little bit of it and I have you bookmarked to check out new stuff you post. Erotisch massagesalon

Glad to chat your blog, I seem to be forward to more reliable articles and I think we all wish to thank so many good articles, blog to share with us. Budget zwembad

New site is solid. A debt of gratitude is in order for the colossal exertion. Erotische massages

I have read your article, it is very informative and helpful for me.I admire the valuable information you offer in your articles. Thanks for posting it.. Erotische massages

Thanks for the informative and helpful post, obviously in your blog everything is good.. Budget zwembaden