"Appellant's petition for rehearing is denied," the decision reads (pdf). "As no member of the panel and no judge in regular active service on the court requested the court be polled, that petition is also denied." 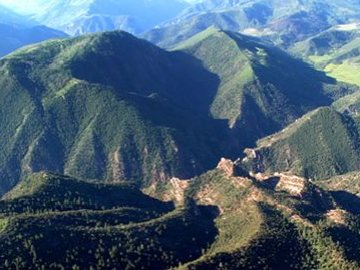 The Court of Appeals decision harkens back to 2008 when a federal court in Wyoming found that the roadless rule violated environmental law. When the 10th Circuit overturned that 2008 ruling last fall, it opened the door for the Obama administration to enforce the Clinton rule.

“[The] court decision gives President Obama a green light to implement one of the nation's most important conservation polices," said Jane Danowitz, director of the Pew Environment Group's U.S. public lands program. "With the last legal barrier cleared, the administration should move quickly to enforce the roadless rule as the law of the land."

It is possible the national rule could land before the Supreme Court.

In the meantime, Republicans in the House led by California Congressman Kevin McCarthy are promoting the Wilderness and Roadless Area Release Act, which would essentially invalidate the 2001 Clinton rule. Dozens of GOP congressmen, including Doug Lamborn and Mike Coffman in Colorado, are co-sponsoring the bill. Many Colorado businesses oppose the legislation, saying it poses "a serious threat" to the state's outdoor-recreation-based economy.

For a decade, the federal roadless rule has been immersed in legal challenges. The uncertainty prompted Colorado and Idaho to craft their own rules. The Department of Agriculture is reviewing Colorado's plan, which would allow exemptions for coal mining, logging and expansion of ski areas.

Now that there is a final decision in the 10th Circuit, conservationists say Colorado's rule isn't needed.

“The court's action eliminates the need for the administration to pursue a separate policy in Colorado, undertaken when the roadless rule's legal status was in doubt," Danowitz said. "The Colorado plan would open up a majority of the state's best backcountry to coal mining, drilling, and other large-scale activity. The importance of a national policy to preserve what remains of America's pristine forests cannot be overstated. Without the roadless rule, protection of these areas would be left to the patchwork management system that has resulted in millions of acres lost to industrial development."

Nonetheless, sportsmen's groups, other forest users and special interests continue to work with Colorado officials and the U.S. Forest Service to tweak the Colorado rule and improve it.

I would also motivate just about every person to save this web page for any favorite assistance to assist posted the appearance. สล็อต ฝาก-ถอน

Your writings and news are really interesting to me. There are numerous advantages to the contents. Thank you so much. My site:: ole777 casino

Really it is very useful post and that i choose to read these techniques and in addition I will be having a go and many thanks sharing such kind of techniques please ensure that it stays sharing. London taxi service

Just like the old saying goes, within the pro’s head there are few options, however , for a person with the beginner’s brain, the world is open up. sportsnewslive

Yes lepetiw688, you are spot on with what you say..thanks for sharing this with us Defence Lab Stafford UK

Fully agree with all of the above, thanks for sharing this Sydney actor

There are a few interesting points with time in the following paragraphs but I don’t know if these center to heart. There’s some validity but I most certainly will take hold opinion until I look into it further. Great post , thanks and then we want more! Put into FeedBurner likewise downloadgram story

I must thank you for your efforts you have made in publishing this web site post. I hope the identical best article by you later on also. Actually your creative writing expertise has encouraged me to start out my very own website now. Actually the blogging is spreading its wings quickly. Your write up is really a fine model of it. local Actors in Sydney

The Court of Appeal has entered into force. Thank you guys for your help retro bowl online.

I am always searching online for articles that can help me. There is obviously a lot to know about this. I think you made some good points in Features also. Keep working, great job ! Zonnepanelen Mechelen

It is perfect time to make some plans for the future and it is time to be happy. I've read this post and if I could I desire to suggest you some interesting things or suggestions. Perhaps you could write next articles referring to this article. I want to read more things about it! Warmtepomp verwarming

They're produced by the very best degree developers who will be distinguished for your polo dress creating. You'll find polo Ron Lauren inside exclusive array which include particular classes for men, women. Zonnepanelen Meise

The article posted was very informative and useful. You people are doing a great job. Keep going. Warmtepomp premies

This was among the best posts and episode from your team it let me learn many new things. Zonnepanelen Oud-Heverlee

This is a good post. This post gives truly quality information. I’m definitely going to look into it. Really very useful tips are provided here. Thank you so much. Keep up the good works Zonnepanelen Overijse

Very nice article. I enjoyed reading your post. very nice share. I want to twit this to my followers. Thanks !. Thuisbatterij

Good to become visiting your weblog again, it has been months for me. Nicely this article that i've been waited for so long. I will need this post to total my assignment in the college, and it has exact same topic together with your write-up. Thanks, good share. Zonnepanelen Scherpenheuvel-Zichem