Powder to the people: storm headed into Colorado high country for President's Day

While Saturday and Sunday will be mostly sunny and snow-free, forecasters say a system is headed in from the west on Sunday night, and ski areas from Vail to Aspen can expect up to nine inches of new snow by Monday morning.

Longer-range forecasts are calling for a favorable snow track throughout much of next week. Opensnow.com predicts Vail and Aspen will see 2-4 inches Sunday night and another 3-5 inches Monday morning.

Most resorts in the northern and central mountains have enjoyed as much as two feet of new snow in the last week, providing by far the best ski conditions in what's generally been a below-average season across most of the state. 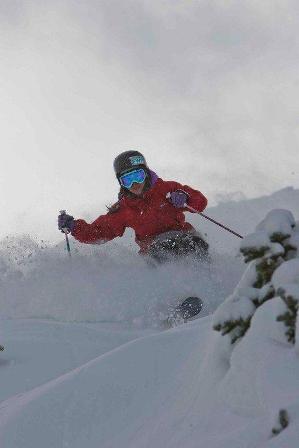 Crested Butte's North Face is now open for business.
Natan Bilow
Only southern resorts such as Telluride, Durango Mountain Resort, Silverton and Wolf Creek have consistently received above-average snow. Once again, Sunday's storm is expected to hit those areas first and deposit a little more snow during the day Sunday.

Opensnow.com is calling for 3-6 during the day Sunday as far north as Crested Butte, where the vaunted North Face terrain just opened for the first time this season.

Vail, meanwhile, is bracing for big weekend crowds for the holiday weekend. The town has implemented parking restrictions, and season ski pass restrictions will be in effect Saturday and Sunday at Vail and Beaver Creek.

The Epic Local Pass, Merchant Pass, Guest Fee and Community Relations passes will all be blacked out on Saturday and Sunday. Snow riders holding one of those passes can purchase a discounted day pass at any ticket window (price varies depending on the pass product). Restrictions will be lifted in time for the anticipated powder day on Monday.

The Colorado Department of Transportation (CDOT) anticipates heavy traffic on I-70 westbound today and Saturday, with heavier than normal traffic on eastbound I-70 Sunday and Monday, especially between Vail and Denver.

“Because heavier traffic is expected on eastbound I-70 Sunday and Monday afternoon, people traveling the corridor should be prepared for metering operations at the Eisenhower Tunnel,” said CDOT regional transportation director Tony DeVito. “Metering isn't something we want to do as we know it's frustrating for drivers caught having to sit and wait for the tunnel to clear. It's done strictly for safety.”

CDOT holds, or “meters,” traffic at the tunnel for up to 20 minutes when back-ups occur. CDOT stops vehicles from entering, allowing traffic to clear before releasing more traffic into the tunnel. Metering is done so emergency vehicles can enter the tunnel in case of an accident.

Weather may also be a factor along I-70 Sunday night and Monday.

The Colorado Avalanche Information Center rates the backcountry snow-slide danger as “considerable” throughout much of Colorado's high country. Use extreme caution all weekend and check conditions before heading out any backcountry gates.

A Keystone ski patroller, reportedly skiing on his own time near Wolf Creek, died in an avalanche on the Thursday -- the sixth slide death of the season. The Summit Daily News also reported an avalanche in Mushroom Bowl, in Vail's backcountry, injured a snow rider on Thursday.

1 Comment on "Powder to the people: storm headed into Colorado high country for President's Day"