Colorado's skimpy snowpack is setting off alarm bells for U.S. Reps. Cory Gardner and Scott Tipton. But not because they interpret the drought as a sign of human-caused climate change. The way they see it, Congress should slash environmental protections — not strengthen them.

Both of the Republican lawmakers recently referenced the Centennial State's relatively weak winter in their arguments to build more reservoirs and knock down perceived regulatory roadblocks.

“The natural cycle of rivers in the West is one of boom and bust, surplus and drought. But with proper water storage, economic cycles do not have to be boom and bust, recreational opportunities can be reliably provided, and water can be allocated where it is best needed to meet environmental, species protection goals and support our farm and ranch communities,” Tipton said in his opening statement. 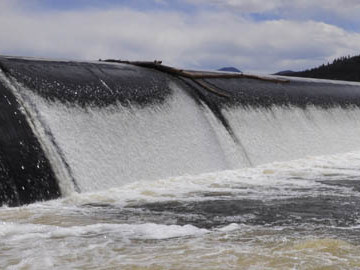 Conservationists, however, believe the congressional hearing was nothing more than a thinly veiled attempt to further undermine environmental laws. Instead of building new reservoirs, they encourage the conservation and recycling of water, and the modernization of Colorado's aging infrastructure.

"Much of that infrastructure is over a century old and is in need of serious repair," Midcap wrote. "We believe these repairs to dams, canals and diversion structures can be done in a way that provides benefits to both irrigators and the streams, as has been demonstrated in many areas of the western U.S. These kinds of projects are the most likely to win strong public support and produce the kind of benefits that will last far into the future. While new water storage may be needed in some limited situations, it must be done in a way that protects the values we all hold in common: economic efficiency and healthy rivers and streams."

A new report (pdf) projects hydraulic fracturing in Colorado will spike from 4.5 billion gallons of water used in 2010 to more than 6 billion gallons of water in 2015 — a 35 percent increase. The study assumes the number of oil and gas wells in Colorado will remain relatively flat and attributes the increased water use to escalated vertical oil drilling, which sucks more water than horizontal methods. Agriculture is the biggest drain on state water supplies, accounting for more than 4.6 trillion gallons, or 85.5 percent, of water use in 2010, followed by municipal and industrial uses at 7.4 percent. Hydraulic fracturing — chemically treated water pumped into the earth to release deposits of oil and natural gas — accounts for .08 percent. Coal, natural gas, uranium and solar drink .03 percent, according to the report prepared by the Colorado Oil and Gas Conservation Commission and other state agencies.

Oil and gas development is prevalent in Gardner's home district in Northern Colorado where drillers are busily flushing oil and gas from the Niobrara formation with powerful cocktails of fracking fluid.

"If we are going to have a long-term outlook for economic growth, we must have the water that is necessary to survive and grow," Gardner reportedly said. "That's not only to meet the needs of the population, that's to meet the needs of agriculture and industry. That's why I think we need to go forward with projects like NISP, and we need to go look for other new projects."

The Draft Environmental Impact Statement, however, says that NISP "would not likely change land use or zoning plans of participant communities, increase employment opportunities, or increase other growth pressures." Caring for the river instead of developing it could actually create more jobs.

"A strong case can be made that a well-structured no-action alternative relying on water conservation, water-sharing agreements with farmers and water recycling would provide more long-term and higher-paying 'green jobs' that protect the Cache la Poudre River and protect our region's future," Gary Wockner, director of Save the Poudre, wrote in a recent Coloradoan guest editorial.

Residents would have to fund NISP through higher water rates and tap fees, he added.

"It seems like every few months Gardner flies home from Washington D.C. and takes a quick tour of Northern Colorado to rant about NISP. And every few months, his rants have no basis in fact," Wockner wrote. "If NISP is built, it won't provide any more jobs than if NISP is stopped dead in its tracks. And, NISP won't increase economic activity in Northern Colorado, but will cost Northern Coloradans more of their hard-earned dollars — about a billion of them."

Gardner and Tipton claim environmental regulations are slowing down U.S. water storage plans but, ever since 1966, the Bureau of Reclamation has needed an act of Congress to build a reservoir.

Michael Gabaldon, director of technical resources for the Bureau of Reclamation in Denver, testified at the subcommittee hearing last week that there are roughly three dozen federal dams, project features or other storage facilities in the West that Congress authorized but so far they have not been funded or constructed.

"The most frequent reasons center around economics or an inadequate potential water market associated with the given facilities," he said. "In other cases, environmental, safety or geologic challenges came to light during a project's development, and rendered its construction, completion or operation unfeasible. Political opposition often contributed, leaving the facilities 'on the books' awaiting further action."