RealAspen News and Community Content Feed
By Real Vail
Real Aspen – February 13, 2012
There were plenty of familiar faces on the podium Sunday at the inaugural Winter Teva Mountain Games presented by Eddie Bauer, as many seasoned veterans of the annual summer event proved their mettle in the snow.

Josiah Middaugh (Vail, Colo.) and Sari Anderson (Carbondale, Colo.), who have more than a dozen gold medals from the summer Teva Mountain Games between them, collected a few more at the new winter version of the event.

Middaugh, who is an undefeated, five-time winner of the Ultimate Mountain Challenge in the summer, decided to skip the winter version of the event and focus instead on his specialty – running – both with and without snowshoes. 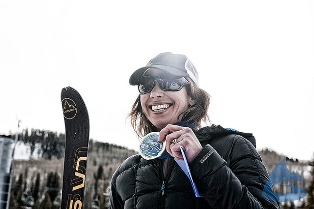 Sunday at 7 a.m. more than 100 people lined up for the start of the Bud Light Vail Uphill, a two-mile, 2,200-foot climb on slopes of Vail from the base of the mountain. Competitors could “pick their grip” for the race, choosing between running shoes, randonee skis with skins, snowshoes or Nordic skis for the race.

With just a few hours of rest from racing the night before, Middaugh ditched his snowshoes in favor or spiked running shoes and picked up another victory for the weekend, finishing with a time of 32:03. Jason Delaney (Golden, Colo.) finished in second place at 32:22 and John Tribbia (Boulder, Colo.) finished in third at 32:31.

The Bud Light Vail Uphill also served as the final race of the Ultimate Mountain Challenge (UMC), along with Friday's 10K Nordic race and Saturday's 20-mile ski mountaineering race. With a cumulative time of 5:30:32, Anderson became the first person to win both a winter and summer UMC championship. For the women, Smiley finished in second with a time of 5:35:38, and Kremer in third at 6:02:36.

Despite narrowly losing the ski mountaineering race on Saturday, National Winter Triathlon Champion, Brian Smith (Gunnison, Colo.) maintained his lead in the men's UMC race, beating Marshall Thomson (Crested Butte, Colo.) in the uphill race Sunday to claim the overall UMC victory with a cumulative time of 5:12:29. Thomson was second in 5:16:48 and adventure racing legend Mike Kloser (Vail, Colo) showed he still has plenty of gas left in the tank at age 52 and claimed third place at 5:17:31.

Weed For Sale, Canna dispensary is the best most reliable and discreet wees shop online where you can order weeds online. thc vape juice for sale

พีจี The best online slots games on mobile phones in a new format, with a simple, fun playing style, not boring like playing slots in the old ways anymore.

pg The best online slots games on mobile phones in a new format, with a simple, fun playing style, not boring like playing slots in the old ways anymore.