RealAspen News and Community Content Feed
By Real Vail
Real Aspen – February 12, 2012
After a fairly powdery weekend at most resorts in the northern and central mountains – including Vail and Aspen – another round of snow is heading into Colorado's high country tonight and Monday morning.

While heavy snow is once again hitting the southern part of the state, most forecasts are calling for at least a few inches from Aspen to Summit County by Monday morning. Then another storm is set to roll into the state Tuesday night into Wednesday.

The new snow will fall on top of nearly a foot of fresh snow that's fallen since Wednesday of last week. Vail has finally topped 150 inches of cumulative snowfall this season, and all 31 lifts are now operating. 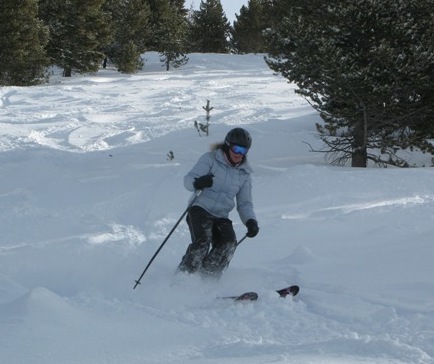 After that, things dry out Wednesday afternoon through Saturday, with another round of storms starting Sunday (just in time for President's Day).

Pent-up powder aggression had snow riders out en masse on Saturday, with cars lining the frontage roads in Vail for only the third time this season. The Colorado Department of Transportation (CDOT) cancelled its Rolling Speed Harmonization program today during peak traffic hours between 11 a.m. and 6 p.m.

The state highway agency scrapped the pace cars because the volume of traffic was expected to be too high for the program to be effective.

Traffic snarls won't be an issue during the upcoming weekday powder storms, but backcountry snow riding could be a bit problematic.

“Recent reports are mentioning that the snowpack is getting noisy again,” Scott Toepfer of the Colorado Avalanche Information Center wrote this morning. “Rumbling collapses, cracking up to 200 feet across, and reactive pit tests. Time to raise the avalanche antennas again. It is not taking much new snow to create a reactive snowpack.”

The avalanche danger was rated as considerable in both the Aspen and Vail/Summit County areas this morning.

1 Comment on "More snow headed for Vail, Aspen this week"

This is my first time i visit here. I found so many interesting stuff in your blog especially its discussion. From the tons of comments on your articles, I guess I am not the only one having all the enjoyment here keep up the good work N95 Face Mask