"It's not at all what I had in mind when I came here," Vonn said of cracking the top 10 in the GS but failing to finish in Saturday's slalom. "I was looking for podiums and the first giant slalom [Friday] was canceled, I skied out oft the slalom and finished eighth here. It's an obvious disappointment.

"Unfortunately, I made a really big mistake right in the middle of the course going onto the flat [in today's GS] and lost a lot of time."

Eagle-Vail's Mikaela Shiffrin was 26th for her first ever World Cup GS points. Shiffrin was 10th in Saturday's slalom.

“All year I've been so frustrated with giant slalom because I get down and I don't feel like I've skied very well and then to top it off I don't get a second run to try and make it better,” said Shiffrin, a 16-year-old U.S. Ski Team rookie and Burke Mountain Academy student.

“So finally I got the second run and I couldn't be more excited,” she added. “This entire experience in Andorra has been great. I hope we get to come back here.” 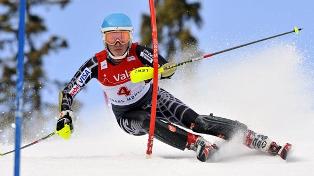 Now the women's circuit shifts to Sochi, Russia for 2014 Olympic speed-event tests in downhill and super-combined – both disciplines that Vonn currently leads. The Ski and Snowboard Club Vail athlete still leads the chase for her fourth overall title by 410 points over Maze and 494 over defending overall champion Hoefl-Riesch.

"I'm really excited to go to Sochi," Vonn said. "It's the first chance we're going to have to look at the Olympic course. I've heard a lot of things about it, but I've never seen it.

"It will be my first trip to Russia, so I'm really looking forward to getting a good look at the course and hopefully putting down a few good runs on it so I can prepare myself for the Olympics."

The men's circuit finished up today at Rosa Khutor, the ski resort that will host all the alpine events for the Sochi Winter Olympics in 2014.

Bode Miller once again finished fourth in a downhill there after just missing the podium on Saturday. But today the downhill was just one part of the combined event, and the American great couldn't finish the slalom.

Ted Ligety, of Park City, Utah – the combined Olympic gold medalist in 2006 -- also skied out in the slalom.

The men's tour now moves to Bansko, Bulgaria, for a giant slalom and slalom.

Efficiently written information. It will be profitable to anybody who utilizes it, counting me. Keep up the good work. For certain I will review out more posts day in and day out. CNPR Reviews

I genuinely believed you would probably have something useful to say. All I hear is a bunch of whining about something that you can fix if you were not too busy looking for attention. After all, I know it was my choice to read.. LawTech

Your work here on this blog has been top notch from day 1. You've been continously providing amazing articles for us all to read and I just hope that you keep it going on in the future as well. Cheers! Litigant in Person

Nice post! This is a very nice blog that I will definitively come back to more times this year! Thanks for informative post. 먹튀 보증업체

Regular visits listed here are the easiest method to appreciate your energy, which is why why I am going to the website everyday, searching for new, interesting info. Many, thank you 꽁머니홍보방

If you don"t mind proceed with this extraordinary work and I anticipate a greater amount of your magnificent blog entries.  Surah Ar Rahman

I found so many interesting stuff in your blog especially its discussion. Really its great article. Keep it up. kielce nieruchomosci

Wow, this is really interesting reading. I am glad I found this and got to read it. Great job on this content. I like it. 먹튀

Nothing compares to Weber using Genesis sort of grills. That is certainly the type gas grills which have been that will always make sure that they deliver a high performance part of down interval residential moving services

Good artcile, but it would be better if in future you can share more about this subject. Keep posting. [url=https://toto-pro.net]먹튀검증업체[/url]

Good artcile, but it would be better if in future you can share more about this subject. Keep posting. 먹튀검증업체

I think this is definitely an amazing project here. So much good will be coming from this project. The ideas and the work behind this will pay off so much. CNPR

Thanks for taking the time to discuss that, I feel strongly about this and so really like getting to know more on this kind of field. Do you mind updating your blog post with additional insight? It should be really useful for all of us. 안전놀이터

definately enjoy every little bit of it and I have you bookmarked to check out new stuff of your blog a must read blog! Sobha windsor price

Your post has those facts which are not accessible from anywhere else. It’s my humble request to u please keep writing such remarkable articles content marketing for family businesses

It is truly a well-researched content and excellent wording. I got so engaged in this material that I couldn’t wait reading. I am impressed with your work and skill. Thanks. 402 935 7733 credit card charge

Many homework on the continual hunt along with offstage on the road to winning. Definitely not attached, simple to-fall as a result of wayside; And not investigation, afterward into a path travel toward the black. weight loss pills for women

A very awesome blog post. We are really grateful for your blog post. You will find a lot of approaches after visiting your post. I was exactly searching for. Thanks for such post and please keep it up according to Yahoo

definately enjoy every little bit of it and I have you bookmarked to check out new stuff of your blog a must read blog! สล็อตออนไลน์ฟรีเครดิต

I want to say thanks for beautiful blog sharing with us. Your blog really great resource to update my knowledge. Book Best short let apartments in Osapa London Lagos

I was surfing net and fortunately came across this site and found very interesting stuff here. Its really fun to read. I enjoyed a lot. Thanks for sharing this wonderful information. top test boosters on the market

I needed to thank you for this phenomenal read!! I unquestionably adored each and every piece of it. I have you bookmarked your site to look at the new stuff you post. Mold Damage

I'm constantly searching on the internet for posts that will help me. Too much is clearly to learn about this. I believe you created good quality items in Functions also. Keep working, congrats! automotive electrification

I definitely enjoying every little bit of it. It is a great website and nice share. I want to thank you. Good job! You guys do a great blog, and have some great contents. Keep up the good work. big gaming