RealAspen News and Community Content Feed
By Real Vail
Real Aspen – February 12, 2012
The Winter Teva Mountain Games made some winter sports history Saturday night as telemark skiers and freeride mountain bikers jumped side-by-side, on the snow and under the lights in a one-of-a-kind big air contest at Golden Peak. The unique event capped off a day of intense competition for bikers and skiers in Vail.

The big air event was actually a combination of two competitions, the Teva Best Trick for bikers and the Thule Telemark Big Air for skiers. The Teva Best Trick featured 10 of the world's best freeride mountain bikers, hitting the country's biggest bike snow jump, throwing flips and tricks for a massive crowd at the Golden Peak base area. 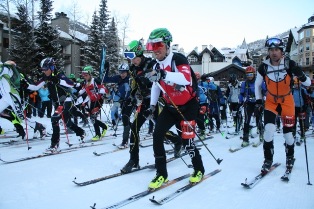 The Thule Telemark Big Air included an impressive array of tricks from the country's best free-heelers. Christopher Ewart won the event with his double-cork 1080. Jeremy Clark and Kjell Ellefson were second and third.

More than 130 skiers started the Eddie Bauer Ski Mountaineering race early in the morning, making it one of the largest races of its kind in the country. The elite race, which included over 10,000 feet of climbing over 18 miles, was a hard fought battle for first place among a trio of Gunnison County men.

After the first two events in the Ultimate Mountain Challenge, both the men's and women's competition remains fierce. Brian Smith leads the men's race, with a cumulative time of 4:29:37 after the 10K Nordic race on Friday and today's ski mountaineering race. Marshall Thomson is just 4:19 back from Smith and Mike Kloser is only 40 seconds back from him.

Sari Anderson leads the women's Ultimate Mountain Challenge with a cumulative time of 4:48:00. Janelle Smiley is in second at 4:52:47 and Stevie Kremer is in third at 5:19:45.

The final race of the Ultimate Mountain Challenge is today's Bud Light Vail Uphill, a two-mile, 2,200-foot climb from the base of Lionshead to the top of the Eagle Bahn Gondola.

For complete results and a full schedule of today's action, go to the Winter Teva Mountain Games website.

The Gamecube is considered by many gamers to be one of the best gaming consoles ever made. Though it's no longer in production, there's still a way to play all your favorite Gamecube games - by getting or downloading ROMs online and using a Gamecube emulator. Now that you know how, go forth and enjoy some classic gaming!

Minecraft APKCima.Com is a game for everyone. Whether you’re young or old, there’s an adventure waiting for you inside Minecraft. So what are you waiting for? Start your own story today!