RealAspen News and Community Content Feed
By Real Vail
Real Aspen – February 10, 2012
Colorado's mountain resorts are headed back into a stormier weather pattern over the next week, as both Vail and Aspen received four inches of new snow overnight Wednesday.

Two more inches fell Thursday, depositing a total of six inches at both Vail and Beaver Creek. Aspen-area mountains saw another four inches of snow Thursday for a total of eight inches from the storm.

The blast of snow was welcome after a relatively dry two-week period in the northern and central mountains.

Vail had not seen significant snowfall since 11 inches fell on Friday, Jan. 27. While residents of the southern part of the state and Colorado's Front Range were counting snow by the foot earlier this month, Colorado ski country from Summit County to Aspen only received a few inches here and there.

Now the storm track seems to be shifting into a more favorable pattern for snow riders. Opensnow.com is calling for a few inches of new snow through the weekend and then a series of storms next week. 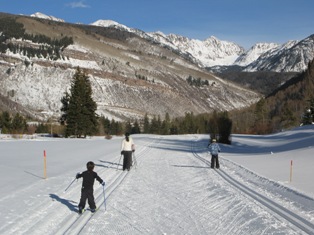 Nordic skiing at the Vail Golf Course has been excellent of late, but overall snowfall totals have been light the last couple of week. Now snow is back in the forecast.
David O. Williams
As has been the case all season, the southern San Juan Mountains will see the most snow, but the northern-central mountains will share in the bounty to some degree, with Monday looking like a pretty decent powder day at Aspen and Vail.

"It looks like southern Colorado will have a powder day on Sunday, and much of Colorado ... should have some powder on Monday. I love when the powder days 'force' you to make it a long weekend," Joel Gratz of Opensnow.com wrote in an email update Thursday.

The skiing at Vail was good Thursday, with six inches of light, dray snow on top of a fairly firm base. Conditions remained soft and fairly cold at Beaver Creek today. Forecasters are calling for a few more inches tonight, followed by a much more significant storm Sunday night. After a bit of break, another storm rolls into the state Monday through Wednesday.

The change in the storm pattern is welcome news after a record dry December that has ski areas from Aspen to Vail playing catch-up. An above-average January helped – Vail is now nearly 100 percent open, with 29 of 31 lifts operating and 4,977 of 5,289 acres available -- but the last two weeks have been a bit skimpy.

Vail is still under 150 inches of total snowfall for the season with just over two months of skiing left. It averages 350 inches a season.

Wednesday's storm dropped more snow than expected, and the Colorado Avalanche Information Center rated the avalanche danger "considerable" Thursday and Friday morning in both the Vail and Aspen areas.

Also be careful of obstacles because of the low snowpack. Dead-fall trees and even sagebrush shrubs are sticking up in the backcountry as well as the side country just out the gates at your favorite ski areas.