RealAspen News and Community Content Feed
By Real Vail
Real Aspen – January 28, 2012
Vail's Lindsey Vonn no longer seems to be racing against the rest of the field on the women's World Cup circuit. After yet another win today in a downhill in St. Moritz, Switzerland – the American record 49th of her career – it seems like Vonn is chasing down history.

Vonn crushed the field by 1.42 seconds for her first downhill victory at St. Moritz and the 24th of her remarkable career. The Ski and Snowboard Club Vail (SSCV) product now has eight wins this season (including a super-G victory at Beaver Creek) and two so far this weekend. She'll try to sweep the St. Moritz weekend and get her 50th career win in a super combined event on Sunday.

“I feel like 50 is a pretty substantial landmark in my career,” Vonn said. “I'm trying to keep my focus on the race tomorrow. It's going to be a tough super combined because [Slovenia's] Tina Maze is extremely fast in super-G and also in slalom. I have to execute and hopefully if I can do that then number 50 will come. It means a lot to me, so I'm trying not to think about it.” 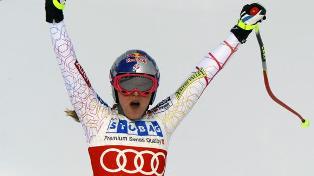 A little over halfway through the World Cup season, Vonn has won eight of the first 20 races held so far. If she wins seven of the last 18 races on the schedule, Vonn will surpass Vreni Schneider of Switzerland for the most wins in a single season (14) and also for sole possession of second on the all-time career victory list (55).

Schneider set the single-season women's record in 1988-89. The most Vonn has ever won in one season is 11 in 2009-10, which is tied with two others for the second most wins in a single season (including Austria's Annemarie Moser-Pröll).

“It feels pretty special to tie Renate [Goetschl] for downhill wins, but [Annemarie] Moser-Pröll still has a lot more than I do, so I have a long ways to go. She pretty much dominated, so I have my work cut out for me.”

Of the 18 remaining races this season, seven are speed events (five downhills and three super-Gs) and nine are tech events (five giant slaloms and four slaloms). There are also two super combined races remaining, including Sunday's.

Vonn is more of a speed-event dominator but has been skiing well enough in tech events, including her first win ever in GS, to now lead the overall hunt by 352 points over Maze.

“Leanne [Smith] is skiing extremely well and I'm really happy for her and for Julia [Mancuso] … everyone is skiing really well,” Vonn said. “As a team, we're on a roll and it's fun to see all the girls so excited and skiing so well. Every day all of the girls on this team have a chance to be on the podium.”

“I'm at a good spot right now and I just want to keep learning and figuring out where I can be faster,” Smith said. “It's not just understanidng this course, it's understanding how to be better on the turns and how to make up time by getting more out of the gates up ahead of you.”

I think this is an informative post and it is very beneficial and knowledgeable. Therefore, I would like to thank you for the endeavors that you have made in writing this article. All the content is absolutely well-researched. Thanks... Canada Visa for Bulgarian Citizens