"Triggering avalanches is likely on any snow-covered slope 30 degrees or steeper that did not slide during the natural cycle yesterday {Sunday}," reads the CAIC website. "The natural avalanche cycle has largely run it course, so [CAIC] will drop the Avalanche Warning, but natural avalanches are still possible today [Monday]."

"Triggering slides will be easy today, and some of them will be bigger than what we have seen so far this winter. Triggering avalanches remotely and from low angle or even flat terrain is likely. Be very wary near or below any avalanche terrain, and keep in mind that even small slides can bury and kill you." 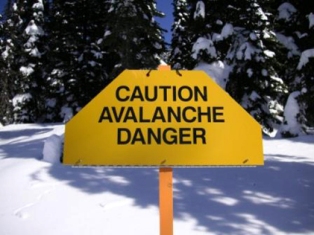 The CAIC went on to state that, "Our deepest condolences go out to their friends and family," referring to the slide victim in Vail. The Eagle County Sheriff's Department did not respond to a request for additional information on Sunday.

The newspaper also cited a statement from Vail Mountain officials saying the the avalanche occurred in closed section of an expert run on the front side of the mountain called Prima Cornice. Vail Ski Patrol got a call at 1:40 p.m., responded and transported Conlin to Vail Valley Medical Center. The incident is still under investigation.

Keith Ames, a 43-year-old Aspen local, was killed in an avalanche on Burnt Mountain at Snowmass ski area last week.

A very dry month of December and sudden surge of January snow has made for an exceptionally weak snowpack. Extreme caution should be exercised in the backcountry and even the side country just outside backcountry access gates at ski areas.

Two more avalanche deaths occurred later in the day Sunday: an Evergreen man died in an in-bounds slide at Mary Jane ski area adjacent to Winter Park in Grand County, and a Fort Collins man died in an avalanche while snowmobiling on the east side of Buffalo Pass near Steamboat.

At 10:50 this morning, the Eagle County Sheriff's Department issued the following press release:

VAIL, Colo. - Jan. 22, 2012 - A 13 year-old male from Colorado was transported to the Vail Valley Medical Center after becoming caught in a skier-triggered avalanche in a closed section of Prima Cornice, an expert-level trail on Vail Mountain. Vail Ski Patrol received a call at approximately 1:40 p.m. and ski patrol responded immediately.

Ski patrol provided advanced life support and transported the patient to an awaiting ambulance. He was then transported to the Vail Valley Medical Center. The incident is under investigation.

The Eagle County Sheriff's Office, Vail Mountain, the Vail Ski Patrol and Vail Resorts extend their deepest sympathy and support to the family and friends of the skier.
RealAspen News and Community Content Feed