“American Tradition Partnership will appeal to federal courts regarding the Montana Supreme Court's incorrect and contemptuous ruling last week,” ATP's Executive Director Donald Ferguson said in a release. “We, and impartial legal scholars, are confident these unbiased courts will uphold the First Amendment rights of Montanans to speak freely about power holders.”

The 5-2 Montana ruling flies in the face of the landmark 2010 U.S. Supreme Court ruling in Citizens United versus the Federal Elections Commission. That ruling by a 5-4 margin in 2010 blocked the government from limiting spending by corporations and unions for political purposes, as long as that spending is independent and not coordinated with campaigns. 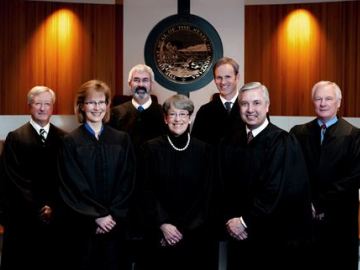 “The question then, is when in the last 99 years did Montana lose the power or interest sufficient to support the statute, if it ever did. If the statute has worked to preserve a degree of political and social autonomy is the State required to throw away its protections?” McGrath wrote.

ATP's Ferguson countered with this: “To ban political speech based on nothing more than the identity of the speaker is to strike at the very heart of the God-given rights protected by the First Amendment. Those who seek to stop Montanans from associated [sic] and speaking freely are themselves the modern equivalent of the Copper Kings, who in their time perverted law and justice to suppress voices of opposition to their policies.”

Some observers welcome the opportunity to re-open the debate and compel the U.S. Supreme Court to rule again on the issue.

“If they take it up, there will be a new opportunity to push forward all the arguments as to why the court got it wrong,” John Bonifaz of Free Speech for People told Politico, adding that if they reaffirm their prior decision, “that will only fuel the efforts further to allow a constitutional amendment.”

A Slate analysis on Wednesday offered this take on the Montana ruling:

“Western Tradition Partnership, the lead plaintiff in the case, merits extra special scorn from the court for circulating a fundraising brochure that said, ‘If you decide to support this program, no politician, no bureaucrat, and no radical environmentalist will ever know you made this program possible.' The majority openly accuses WTP of being responsible for ‘a multi-front attack on both contribution restrictions and the transparency that accompanies campaign disclosure requirements.'”

The question of who's funding American Tradition Partnership, which was called Western Tradition Partnership when it first challenged the Montana law in 2010, dates back to 2008 when the group was first registered as a 501(c)4 nonprofit in Colorado by Republican political operative Scott Shires.

The group was later re-registered by an attorney for the Denver law firm of Hackstaff Gessler, which is the former firm of current Republican Colorado Secretary of State Scott Gessler, a conservative election campaign lawyer who in the past represented Shires in various campaign finance violation cases.

Ferguson last summer flew out to Montana – at his own expense, he said – to counter community and environmental outrage in the wake of an ExxonMobil oil pipeline spill in the Yellowstone River.

Besides the corporate spending case, ATP is involved in other litigation challenging Montana campaign disclosure laws. The Montana Commissioner of Political Practices in 2010 found that WTP's anonymous campaign fliers attacking Democrats and moderate Republicans “raised the specter of corruption” and merited formal action by the state's attorney general.

That case is being heard by the same judge, District Judge Jeffrey Sherlock of Helena, who ruled in favor of WTP in the corporate spending case just overturned by the Montana Supreme Court.

A trial in that case has been set for March 19, according to John Doran, a spokesman for the Montana Department of Justice, who adds that the case essentially boils down to whether 501(c)4's (named for a section of the IRS tax code) are educational organizations or political committees.

“The State of Montana contends they are political committees subject to state disclosure and disclaimer laws, and that they've spent hundreds of thousands of dollars secretly in Montana to influence Montana elections,” Doran said in an email. “They are arguing they are educational organizations that don't need to disclose anything to the state.”

Colorado lawmakers are watching closely after WTP sent out fliers in a tight state Senate race in 2010 that prompted calls for tougher campaign disclosure laws for 501(c)4 nonprofits.