"It's been my dream to stand next to Marlies Schild on the podium and I did it," Shiffrin said. "Actually being able to fulfill one of your dreams is a crazy feeling."

Shiffrin figuratively took the baton from her fellow Vail Valley resident and SSCV product Sarah Schleper, who skied in her final World Cup race after 15 years on the circuit. 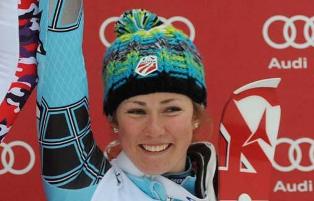 "Sarah told me to go after it and have fun," Shiffrin said. "It was perfect. Something about that makes me very calm because she's been there. I'm so bummed that she's retiring, but she went out with a bang. I'm so proud of her and so proud to have raced next to her."

"After smashing gates with true passion, [Schleper] stopped midway and picked up her three-year-old son Lasse from head coach Alex Hoedlmoser and then continued to run the final gates with him in her arms," U.S. Ski Team spokesman Doug Haney said. "She gave an extra punch to the last one."

Shiffrin did qualify for a second run and turned in the best time of the day, although it wasn't enough to catch Schild and Maze from the first run.

"I didn't know that I was the fastest in the second run until someone told me," Shiffrin said. "I truly can't believe it. Now I just have to keep my head on my shoulders and just keep skiing because those two runs today were so much fun and that's what it's all about."

Schild cut into the overall World Cup lead of a third SSCV product, Vail's Lindsey Vonn, who finished 18th today. Schild has won every World Cup slalom this season, and now trails Vonn by 172 points in the overall hunt.

Shiffrin, who become the youngest U.S. champion in history last spring with a slalom victory at the U.S. Alpine Championships, was making just the eighth World Cup start of her career - fifth in slalom. Shiffrin became the youngest female skier to podium in World Cup slalom since Tamara McKinney did it on Dec. 10, 1978.

The last time an American woman stood on a slalom podium was more than two years ago, when Vonn took second in Levi, Finland. Shiffrin became the third youngest American to podium in a World Cup race in any discipline.

The women's World Cup tour returns on Jan. 5 with a slalom in Zagreb, Croatia.

On the men's circuit, Bode Miller was fifth in a downhill in Bormio, Italy, today, moving him into the World Cup downhill lead. He won a downhill earlier this month on Beaver Creek's Birds of Prey course.

"I take a lot of risks with my skiing, and when I made that mistake on the traverse there was no where else to make up time," Miller said. "I basically had to ski uphill to make the next gate."

I’ve been searching for some decent stuff on the subject and haven't had any luck up until this point, You just got a new biggest fan!.. Low lambda isolatiemortel

Good to become visiting your weblog again, it has been months for me. Nicely this article that i've been waited for so long. I will need this post to total my assignment in the college, and it has exact same topic together with your write-up. Thanks, good share. Horeca koeling

When your website or blog goes live for the first time, it is exciting. That is until you realize no one but you and your. Vloerisolatie

I am always searching online for articles that can help me. There is obviously a lot to know about this. I think you made some good points in Features also. Keep working, great job ! Frigobouw

Hi to everybody, here everyone is sharing such knowledge, so it’s fastidious to see this site, and I used to visit this blog daily Chape

I’m excited to uncover this page. I need to to thank you for ones time for this particularly fantastic read !! I definitely really liked every part of it and i also have you saved to fav to look at new information in your site. Koelcellen

You have done a great job. I will definitely dig it and personally recommend to my friends. I am confident they will be benefited from this site. Isolerende mortel

Going to graduate school was a positive decision for me. I enjoyed the coursework, the presentations, the fellow students, and the professors. And since my company reimbursed 100% of the tuition, the only cost that I had to pay on my own was for books and supplies. Otherwise, I received a free master’s degree. All that I had to invest was my time. Koelcel te koop

Thanks for the nice blog. It was very useful for me. I'm happy I found this blog. Thank you for sharing with us,I too always learn something new from your post. Vloer isoleren

Very nice article, I enjoyed reading your post, very nice share, I want to twit this to my followers. Thanks!. Horeca koeling

I’ve been searching for some decent stuff on the subject and haven't had any luck up until this point, You just got a new biggest fan!.. Chapewerken

I wanted to leave a little comment to support you and wish you a good continuation. Wishing you the best of luck for all your blogging efforts. Koelcel

I don’t think many of websites provide this type of information. Isolerende chape

I truly like you're composing style, incredible data, thankyou for posting. Vloer isolatie

Very informative post ! There is a lot of information here that can help any business get started with a successful social networking campaign ! Koeltechnieker

Nice knowledge gaining article. This post is really the best on this valuable topic. Chapewerk

I would also motivate just about every person to save this web page for any favorite assistance to assist posted the appearance. Isolatie vloer

I was taking a gander at some of your posts on this site and I consider this site is truly informational! Keep setting up.. Vriesinstallaties

Regular visits listed here are the easiest method to appreciate your energy, which is why why I am going to the website everyday, searching for new, interesting info. Many, thank you! Isolatiemortel

This post is good enough to make somebody understand this amazing thing, and I’m sure everyone will appreciate this interesting things. Vriescellen

so happy to find good place to many here in the post, the writing is just great, thanks for the post. Isoleren vloer

Just pure brilliance from you here. I have never expected something less than this from you and you have not disappointed me at all. I suppose you will keep the quality work going on. Low lambda isolerende mortel

You have done a amazing job with you website SEO

Great tips and very easy to understand. This will definitely be very useful for me when I get a chance to start my blog. SEO

Thanks for sharing this information. I really like your blog post very much. You have really shared a informative and interesting blog post . Kapper zonder afspraak

It is the intent to provide valuable information and best practices, including an understanding of the regulatory process. Zwembad aanleggen tuin

Great survey. I'm sure you're getting a great response. SEO zoekmachine optimalisatie