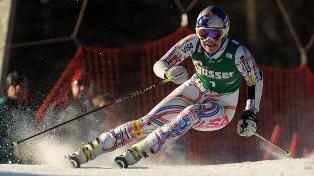 "I was a bit nervous because it was the first time ever I started No. 1," Vonn said. "Especially in GS, it's only the third race that I am in the top seven, so it's pretty exciting.

Minimal snow made for slick and bumpy conditions on one of the longest GS venues on the women's circuit.

"The course is awesome, the snow is perfect, they've done a really good job," Vonn said. "It's not easy. You see there is no snow in the area, but they made the race hill perfect."

Schleper, 32, reportedly announced she'll retire after racing in a slalom -- the final women's World Cup of 2011 -- scheduled for Thursday in Lienz.