Colorado U.S. Sen. Mark Udall Thursday afternoon said he hopes a deal between House Republicans and Senate leaders to end a payroll tax-cut stalemate signals a new willingness for both parties to work together after the holidays.

“I'm grateful that cooler heads have prevailed and that my House colleagues have ended their political brinksmanship over the extension of the payroll tax cut,” said Udall, a Democrat. “This will come as a big relief for Colorado families who were facing a tax hike starting in just a few days.” 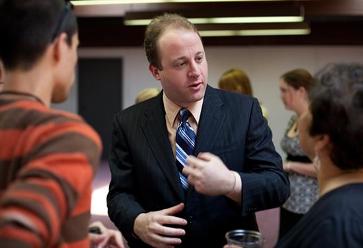 Following the lead of Sen. Mitch McConnell of Kentucky, Republican House leaders caved in to growing pressure and reportedly agreed to a two-month extension of lower payroll tax rates as well as unemployment benefits and Medicare reimbursements.

The Senate's two-month extension passed 89-10 on Saturday, with 39 Republicans voting in favor of the bill. House Republicans overwhelming rejected the deal on Tuesday, insisting the Senate return to Washington and forge a one-year extension.

Unrelenting pressure from Democrats and Senate Republicans forced House GOP members to swallow the Senate deal. The only concession House Republicans got was an agreement that the Senate will appoint members to a House-Senate conference committee to swiftly broker a one-year deal early in 2012.

The two-month extension was approved by voice vote today in the House after the Senate signed off earlier today.

“It may not have been politically the smartest thing in the world,'' Boehner said, according to the New York Times. “But let me tell you what: I think our members waged a good fight.'

Udall, who earlier in the day took the opportunity to blast Republican leadership for the crisis -- including presidential hopeful Mitt Romney – said the partisanship needs to be dialed down dramatically in the new year.

“I hope this is a turning point for this Congress and that we will finally be able to put aside partisan differences and work together -- whether we're talking about a year-long extension of the tax cut - -or any number of issues important to the American people,” Udall said in a release.

An estimated $1,000 tax hike per family was looming at the end of the year if House Republicans continued to dig in their heels and reject a Senate compromise that extended the lower payroll tax rate for two more months and continued unemployment benefits set to expire for another 2.3 million Americans (35,000 in the Denver metro area).

“This whole tragedy is really Mitt Romney ruining Christmas for 160 million Americans,” Polis said early Thursday on a conference call with reporters. “This is typical of the tax-and-spend Republican Party. They're interested in raising taxes on the middle class. They show no interest in lifting a finger to maintain this thousand-dollar tax benefit for middle class families.”

Romney has largely avoided the stalemate, which heated up Tuesday when House Republicans rejected a Senate compromise that was passed by a vote of 89-10 on Saturday – with 39 Senate Republicans voting in favor of the two-month extension. House Speaker John Boehner said the GOP insists on a one-year deal and that Congress should stay in session.

Romney has tried to stay out of what he called the “congressional sausage-making process,” instead trying to deflect blame toward President Barack Obama. But the Obama administration has jumped on Romney's dodging of the issue, and even GOP rivals have joined in. Republican presidential hopeful Newt Gingrich called staying out of the fray a “timidity of calculation.”

“Mitt Romney has dismissed the payroll tax cut as “a little Band-Aid,” but it's beyond interesting to me that his home-state [Massachusetts] Republican senator, my colleague, my friend Scott Brown, has come out strongly in support of the Senate position and the Senate bill,” he added.

Brown issued this statement right after the House vote on Tuesday:

“It angers me that House Republicans would rather continue playing politics than find solutions. Their actions will hurt American families and be detrimental to our fragile economy. We are Americans first; now is not the time for drawing lines in the sand.”

“One thing we've been hearing the American public say ever since the [budget] debacle of last summer is we need to have our elected officials compromising,” DeGette said. “What the tea party Republicans kind of forced the Republican caucus to do was reject the entire compromise.”

Democrats and many Senate Republicans say the two-month extension is necessary to work out a full one-year extension, and that all the many details cannot be ironed out in the nine days remaining before the end of the year.

After calling for the Senate to work through the break and come up with a better bill, Colorado's four Republican House members were quiet on the issue on Thursday.

I would like to thank you for the efforts you have made in writing this article. I am hoping the same best work from you in the future as well. In fact your creative writing abilities has inspired me to start my own Blog Engine blog now. Really the blogging is spreading its wings rapidly. Your write up is a fine example of it. Airco installatie

There's no doubt i would fully rate it after i read what is the idea about this article. You did a nice job.. Warmtepomp prijs

I have a mission that I’m just now working on, and I have been at the look out for such information Zonnepanelen prijzen

I curious more interest in some of them hope you will give more information on this topics in your next articles. Koelinstallaties

Please give some advice on how to achieve this kind of posts. Erotisch massagesalon

I was surfing net and fortunately came across this site and found very interesting stuff here. Its really fun to read. I enjoyed a lot. Thanks for sharing this wonderful information. Koeltechniek

Wow! Such an amazing and helpful post this is. I really really love it. It's so good and so awesome. I am just amazed. I hope that you continue to do your work like this in the future also. Zwembad aanleg

Thanks for sharing this information. I really like your blog post very much. You have really shared a informative and interesting blog post with people.. Airconditioning installatie

As a seller of legal steroids, you can buy Crazy Bulk products, explore stacks and finally get the body you’ve always wanted Zwembad aanleg

I really enjoy simply reading all of your weblogs. Simply wanted to inform you that you have people like me who appreciate your work. Definitely a great post. Hats off to you! The information that you have provided is very helpful. Warmtepomp

This is a fantastic website and I can not recommend you guys enough. Koelcel kopen

I really enjoy simply reading all of your weblogs. Simply wanted to inform you that you have people like me who appreciate your work. Definitely a great post. Hats off to you! The information that you have provided is very helpful. Ramen deuren Antwerpen

Welcome to the party of my life here you will learn everything about me. Airco installateur

There's no doubt i would fully rate it after i read what is the idea about this article. You did a nice job.. Warmtepomp

The web site is lovingly serviced and saved as much as date. So it should be, thanks for sharing this with us. Airco A-Aircool

This is a fantastic website , thanks for sharing. Ramen deuren Leuven

This is really a nice and informative, containing all information and also has a great impact on the new technology. Thanks for sharing it, Airco laten plaatsen

I am really enjoying reading your well written articles. It looks like you spend a lot of effort and time on your blog. I have bookmarked it and I am looking forward to reading new articles. Keep up the good work. Zwembaden maatwerk

Welcome to the party of my life here you will learn everything about me. Offertes online

I’ve been searching for some decent stuff on the subject and haven't had any luck up until this point, You just got a new biggest fan!.. EPS isolatie

I can set up my new idea from this post. It gives in depth information. Thanks for this valuable information for all,.. Aanleggen zwembad

I am really enjoying reading your well written articles. It looks like you spend a lot of effort and time on your blog. I have bookmarked it and I am looking forward to reading new articles. Keep up the good work. Aanleggen zwembad

I just got to this amazing site not long ago. I was actually captured with the piece of resources you have got here. Big thumbs up for making such wonderful blog page! SEO zoekmachine optimalisatie

I have checked this link this is really important for the people to get benefit from. Terrasoverkapping op maat

Three are usually cheap Ralph Lauren available for sale each and every time you wish to buy. Prijs zwembad tuin

Pretty good post. I just stumbled upon your blog and wanted to say that I have really enjoyed reading your blog posts. Any way I’ll be subscribing to your feed and I hope you post again soon. Isolatie dak