Head coach Sasha Rearick thought Miller was about to build on his American men's record of 33 career World Cup victories. 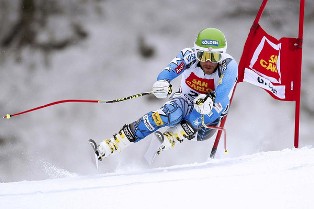 "I thought we had it in the bag for a while; then Feuz out skied us," Rearick said. "But Bode is skiing well and with a lot of confidence. Besides a couple of direct lines in a few spots, it was great skiing by Bode."

Miller acknowledged the errors that may have cost him.

"I made some mistakes on the course and there's not a ton too it," Miller said. "Also, when I went the visibility was pretty bad. If you get a little sun, it can make a huge difference on a course like this. On this particular course you always have to wait until the end because there's guys that can come from the way back and stomp it in."

"This hasn't necessarily been a good hill in the past for Weibrecht, but today he showed some aggressive skiing and I'm proud of his performance," Rearick said.

The famed Saslong Classic downhill is slated for Saturday in Val Gardena.

"The super-G here isn't usually a good indicator for the downhill," Miller said. "There's a lot of variables here -- start position, weather -- everything makes a difference. I think we have the skis that can do it and I have the line that know I need to ski. This is one of my favorite areas in Europe to ski."

Winning competitive races is no easy task. Indeed any competitive task, such as the ones also found on https://assignmentmasters.org/buy-assignments-online.html/ are not easy either. It's difficult therefore to break through.