RealAspen News and Community Content Feed
By David O. Williams
Real Aspen – December 2, 2011
Bode Miller uncorked a near perfect run today on Beaver Creek's Birds of Prey course, winning his third downhill on the daunting track but his first since 2006.

The 34-year-old from New Hampshire needed every bit of his legendary edge-of-disaster speed to hold off a Swiss skier 10 years younger than him. Beat Feuz finished just .04 seconds behind Miller, who started 12th and clocked a winning time of 1 minute, 43.82 seconds. Austria's Klaus Kroell was third with a time of 1:43.96. 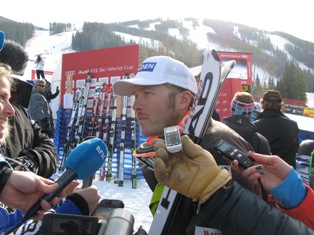 “The way the course has been running and the way the other guys have been skiing, I didn't back off anywhere,” said Miller, a five-time Olympic medalist. “I don't know if you guys saw me back off anywhere; it didn't feel like it. I absolutely charged into every single turn.

“As it was, it was four-hundredths and 14 hundredths [seconds between first, second and third], so if I had backed off anywhere, I know that's gone and I wouldn't be able to deal with that at the finish line if I knew I had slid a little here and there. So I didn't back off at all today.”

It was an absolutely perfect day for ski racing, with mostly sunny skies, cold temperatures, no new snow to speak of, and a massive crowd by U.S. standards.

Of his 33 World Cup wins – the most ever for an American man – four have come at Beaver Creek (three downhills and a giant slalom). But that home-hill knowledge doesn't necessarily help, Miller said.
“I have experience with [the course] and I know what to do, but it doesn't make it any easier that you've won here before,” he said. “It's almost worse. You know what you have to do and the risk is so high and I would say there's no advantage to that at all.”

In fact, knowing just how dangerous the track can be has its disadvantages, Miller said.

“I was really nervous at the start today, and everyone was nervous too just because they know when you really try to win here the risk you take is serious risk. It's not a joke. Seven out of 10 times it doesn't work and you wind up flipping sideways into the fence. And that's a real thing that I have to deal with in the start. It's scary. You get real anxiety about it.”

Known for never really holding back, even when a safer run would still earn points, Miller has always pushed the limits of his considerable ability. He often talks about trying to achieve the perfect ski run, and today he seemed thrilled to have come very close to perfection in front of American fans.

“Every time I've won here I come across the line just totally fired up and excited and happy to still be alive at the finish,” Miller said. Then the Olympic-level partier was asked how he would celebrate tonight.

“We have a super-G [Saturday at 11 a.m.],” Miller said. “It's an important race for me. I've never really had a good super-G here. But my family and all my friends are here; I'm sure we'll do something.”

"I feel like I had a good run," said Ligety, a better technical skier and the winner of last year's Birds of Prey GS. "I'm never going to be fast in that top flat, I don't think, so to be eight tenths out up there is kind of a bummer, but I feel like I skied really well."

The Birds of Prey World Cup races are free and open to the public and can be accessed either on skis or by free shuttle from Beaver Creek Village. Saturday's super-G starts at 11 a.m., followed by a GS starting at 9:45 a.m. on Sunday. Click here for the full schedule of events.