RealAspen News and Community Content Feed
By Real Vail
Real Aspen – November 27, 2011
Lindsey Vonn took the day off to rest her sore back in today's World Cup slalom in Aspen, but another Vail Valley racer stepped up to fill the void, as Eagle-Vail's Mikaela Shiffrin, 16, finished 8th in just her fourth World Cup start.

Squaw Valley's Julia Mancuso, third in Saturday's giant slalom in Aspen, just missed a second run, finishing 31st in the first run. No other American was fast enough for a second run, including Vail's Sarah Schleper. But Shiffrin represented well. 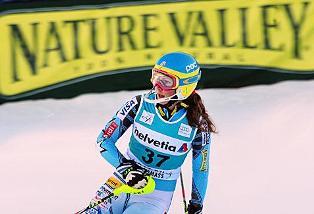 Mikaela Shiffrin finished 8th in Aspen today.
U.S. Ski Team
"All I can say is this is unreal," Shiffrin said. "I'll for sure be excited for the next five months, but it's also probably going to take five years to even realize that I'm racing World Cup."

Shiffrin has studied other Vail racers like Vonn and Schleper.

"I've been watching all these athletes studiously to try and figure out how I can get to their level. I know that will never change," she said. "This is a great accomplishment, but I still have a long ways to go. I'll try to keep things grounded and keep moving forward."

This was the first time Shiffrin has made it to the second run in either a World Cup slalom or GS.

"I always want to win, but it's going to take a long time for that. If I had any expectations for today, then this far exceeded them."

Vonn tweaked her back in training last Friday and finished a disappointing 12th in Saturday's GS. She decided to skip the slalom to rest up for her best events – downhill and super-G – this coming weekend in Lake Louise, Alberta, where she has dominated during her record-breaking career.

The men's World Cup circuit was in Lake Louise this weekend, with Bode Miller duplicating his 9th-place finish in Saturday's downhill with the same result in today's super-G.

The men now come to Beaver Creek for this week's Audi Birds of Prey World Cup, which includes a downhill Friday, super-G on Saturday and a giant slalom on Sunday.