RealAspen News and Community Content Feed
By David O. Williams
Real Aspen – November 2, 2011
The two operating local ski areas got another blast of winter Tuesday night into this morning, with Arapahoe Basin reporting 3 inches of new snow and Loveland reporting 5 inches new. Vail and Beaver Creek, which open later this month, got up to 8 inches new.

The latest storm, which was still producing light snow this morning in Vail, continues a trend of early season snowstorms that have allowed Colorado resorts to get a jump on snowmaking ahead of numerous scheduled opening days in mid to late November.

Arapahoe Basin expands its terrain to the summit for top-to-bottom skiing today. 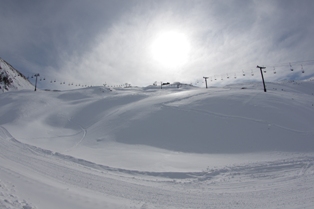 “After the upper mountain has been opened, we will move the snowmaking resources to Sundance and open that as soon as possible, giving our skiers and riders much anticipated beginner terrain.”

"Thanks to the new snow and the round-the-clock efforts of Keystone's snowmaking, grooming and mountain operations team, Keystone Resort will be opening on Friday with top-to-bottom skiing and riding on Spring Dipper and River Run trails, all serviced by the River Run Gondola," according to a Vail Resorts press release, which reported Keystone got 7 inches out of the latest storm.

"For beginners, the resort is offering two learning areas, one at the top of the mountain and one at the Gondola mid-station. In addition, Keystone is debuting one the best and biggest early season terrain parks with 25 new features, all accessed by its own chairlift."

With A-Basin already open and once Keystone opens on Friday, two of five Colorado ski areas available with Vail Resorts' Epic Pass will be up and running. The Epic Pass is still on sale for $669. It also includes unrestricted skiing at Vail, Beaver Creek and Breckenridge.

Forecasters are calling for another blast of snow Friday night into Saturday, with another possible storm early next week.

The new snow Tuesday night and possibility of additional snow Friday night led Colorado Department of Transportation officials to close Independence Pass between Leadville and Aspen for the season today. The popular pass was scheduled to close Nov. 7.

Colorado ski resorts posted their first major snowfall of the season Thursday as storm fronts brought several more inches across the state. The latest avalanche advisory issued by the U.S. You must to click here and learn more new ways for designing light. Forest Service warns that avalanches on any slopes above 6,000 feet above sea level will likely occur at high-risk avalanche terrain this weekend with accumulations of four to seven inches possible in these areas.

Why then are you still holding out? Become persuaded! Several online browsers, including Google Chrome and Mozilla Firefox, provide built-in functionality that allows you to download and save YouTube videos as MP3 or MP4 files. Simply click "Save As" or "Download" when you locate a video you want to save. Visit us youtube to mp4 Despite the fact that there are many internet converters available, we hope that this list has helped you choose the best ones. Whether you want to convert a video to audio or the other way around, these converter tools will help you do it quickly and effectively.

Our cheap paper writing service also favours the students operating on a tight budget essay writing service. Don’t stress about the money because we got you covered in all aspects. Enjoy super discounts and flexible prices from our authors.

I love your blog. Very nice colors and themes. You made this. Did you visit the website in person or hire someone? I'd like to design my blog, but I'd like to know where you got it, so please reply. Cheers!. 메이저토토

I would like to thank you for your efforts in writing. This website I would like to check out the same high-end blog post from you in the future. In fact, your creative writing skills have motivated me to get my own site now. 토토사이트추천

I was very impressed by your writing skills and the layout of your blog. Is this a paid theme, or did you customize it yourself? Keep writing good quality anyway, it's rare to see such a nice blog these days. 플레이포커머니