RealAspen News and Community Content Feed
By David O. Williams
Real Aspen – October 27, 2011
A big winter storm that knocked out power to about 200,000 Xcel Energy customers on Colorado's Front Range and snarled roads – including a closure of Vail Pass on Wednesday – has been a blessing for the state's ski resorts as they gear up for the coming season.

Xcel officials this morning said they had restored power to about 82 percent of their customers after wet, heavy snow fell on trees still full of leaves, causing them to snap and take out power lines.

Most roads are in decent shape this morning, including Interstate 70 into the mountains, as the storm headed out of the state Wednesday night. Clouds were still lingering in the Vail Valley this morning, but forecasts call for sunny, dry weather into next week. 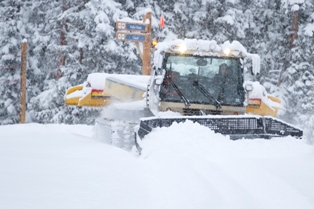 A snowcat moves mountains of new snow at Beaver Creek on Wednesday.
Cody Downard/Vail Resorts
The two ski areas already open on a daily basis – Arapahoe Basin and Loveland – received a foot of new snow and 20 inches, respectively. Wolf Creek Ski Area, which is open this Saturday, Sunday and Monday, was hit with 18 inches of new snow.

Beaver Creek Ski Patrol reported 13 inches of new snow at mid-mountain on Wednesday morning and likely got more than that as snow continued throughout the day. Despite the winter weather, a Beaver Creek spokeswoman reported “the new Rose Bowl [high-speed quad] Lift construction is nearly complete” and on-track for a Christmas debut.

The next two ski areas set to open for the season – Keystone and Copper Mountain in Summit County – both reported fresh snow from the latest storm, although neither resort is providing official snow reports yet. Both ski areas open a week from Friday on Nov. 4. Copper is also hosting U.S. Ski Team training starting next week.

“This snowstorm ensures skiers and riders can look forward to top-to-bottom skiing and riding for opening day at Keystone, as well as 25 new features for all abilities in the early season terrain park,” Keystone officials said in a press release Wednesday. “Nov. 4 is also being named ‘Dercum Day' at Keystone, in honor of co-founder Max Dercum, who passed away this fall.” 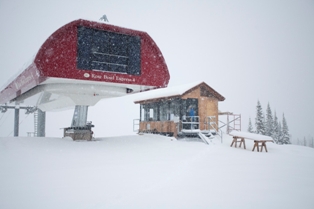 “This 6-8 inches of fresh powder unofficially reported from Copper Mountain Resort this morning will help with our base for opening day,” Copper's David Roth said in an email blast.

Thanks for sharing this information with the title Snowstorm snarls traffic, knocks out power, energizes ski resorts and this looks too good to me. I love ski resorts and these are always more attractive for me. When I did essay writing on such ski resorts I found the best ideas that help me to find more.