Vail received at least 8 inches, possibly more, although there is no official reporting since the resort doesn't open until Friday, Nov. 18. U.S. Ski Team athletes such as Lindsey Vonn and Bode Miller are slated to start training at Vail's Golden Peak Fall Training Arena a week from today and will participate in a public meet-and-greet in Vail on Saturday, Nov. 5.

As reported by Real Vail on Monday, Loveland planned to open more terrain regardless of snowfall totals from this storm. Arapahoe Basin is also weighing its options. 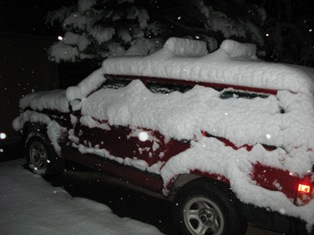 Still snowing in West Vail at 6:30 a.m. Time to get the bikes out of the garage.
David O. Williams
“It will usually take a few more weeks to open top-to-bottom [skiing] at this time of year, but this very well could push that process along,” Arapahoe Basin spokeswoman Leigh Hierholzer said Tuesday. “We've heard reports from everything from 2 to 12 inches, so we will see...”

A-Basin COO and Vice President Alan Henceroth said on his blog Tuesday that the storm will likely make its biggest impact on snowmaking capacity.

“I am not sure we will get enough snow to open any trails with only natural snow,” Henceroth said Tuesday. “Don't forget, it is still October.”

Vail and Beaver Creek snowmaking crews have been at it for well over a week, especially in areas where World Cup race training or actual races will occur. Beaver Creek opens to the public on Wednesday, Nov. 23, and hosts a men's World Cup on its famous Birds of Prey run Dec. 2-4.

Beaver Creek Ski Patrol reported 13 inches at mid-mountain, according to a spokeswoman. The Colorado Powder Forecast is calling for another 2-4 inches today before the storm tapers off this evening. While temperatures will be cooler, the forecast is for warm and dry weather into next week, when another storm is possible mid-week. 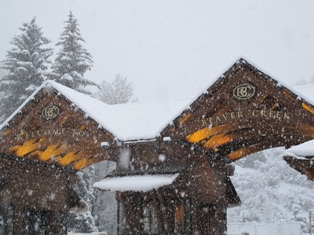 The big news in Vail is the announcement of Jakob Dylan as the headliner for the annual free music and snow riding celebration called Vail Snow Daze. Set for Dec. 5-11, the concert series includes Yukon Kornelius and Guster. Dylan plays Friday, Dec. 9.

It is an excellent blog, I have ever seen. I found all the material on this blog utmost unique and well written. And, I have decided to visit it again and again. solarmovies

Your article has piqued a lot of positive interest. I can see why since you have done such a good job of making it interesting. doglotto.wix.biz

Pretty good post. I have just stumbled upon your blog and enjoyed reading your blog posts very much. I am looking for new posts to get more precious info. Big thanks for the useful info. สมัครFIFA55

I think this is one of the most significant information for me. And i’m glad reading your article. But should remark on some general things, The web site style is perfect, the articles is really great : D. Good job, cheers uwynn888.com